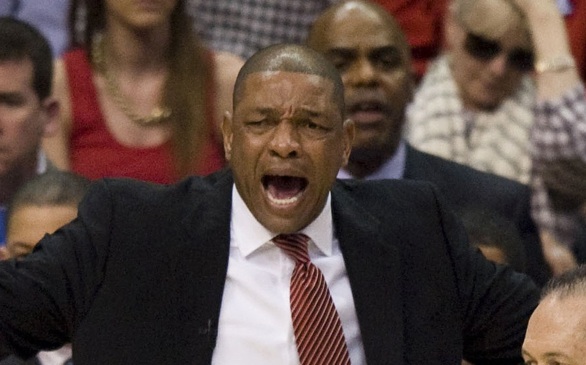 OKLAHOMA CITY — Doc Rivers knew it would probably cost him money, but he didn’t care. He had to get it off his chest.

Sure, the Clippers played their role in a 105-104 loss Tuesday night. They allowed eight points in less than 50 seconds. Their offense crumbled, and their star, Chris Paul, turned the ball over.

But in Rivers’ mind, the Oklahoma City Thunder didn’t win Game 5. No, the referees stole it from the Clippers, who now find themselves trailing in the series, 3-2.

With 17.8 seconds left and the Clippers up two, Paul threw the ball away, and the Thunder charged at the rim. Reggie Jackson appeared to be fouled, but no call was made as the ball went out of bounds.

Officials ruled that the ball was off the Clippers, and though replay evidence appeared to suggest otherwise, the ball stayed with Oklahoma City.

“It was our ball,” Rivers said. “Everyone knows it was our ball. The bottom line is they thought it was a foul and they made up for it.

“…We got robbed because of that call.”

The Clippers led by 13 points with 4:01 to play, seemingly headed toward a closeout game on their home floor Thursday. But, things started to fall apart. The Clippers held the ball on offense, milking the clock. The Thunder’s defense tightened and Paul couldn’t hit a jumper.

Needing a basket, Blake Griffin came down the lane after a pass from Paul and drew a foul. He made the first and missed the second, but Glen Davis grabbed the offensive rebound. The Clippers reset their offense and ran down the clock before Paul knocked down a shot, putting the Clippers up 7 with 49.2 seconds left.

Kevin Durant, who had suffered through a miserable shooting game, drilled a 27-foot jumper after a defensive gaffe. Jamal Crawford missed a layup, and Durant scored again in transition.

Then came the controversial call.

“I’m willing to put my kids on it that the ball went off of (Jackson),” Clippers forward Matt Barnes said.

After the Thunder was given the ball, Paul fouled Russell Westbrook on a 3-point shot, and Westbrook made all three shots, putting the Thunder up one.

In the Clippers’ final chance, Paul couldn’t get past Serge Ibaka, turning the ball over as he anticipated a foul that never came. Following the game, he was devastated.

“It’s probably the toughest thing I’ve been through, basketball-wise,” Paul said. “Everything that happened there at the end is on me. A turnover with 17 seconds left. Assuming that they’re going to foul is the dumbest play I’ve probably ever made. And to even put it in an official’s hand to call a foul on a 3. It’s just bad basketball.”

The Clippers dominated most of Game 5, leading almost wire-to-wire after a hot shooting start from Barnes and J.J. Redick, with the two combining to hit 7 of 11 from 3-point range. And Griffin, who somehow hadn’t recorded a double-double in the playoffs despite having 43 during the regular season, had one by halftime. He finished with 24 points and 17 rebounds.

The Clippers sat in complete silence in their locker room afterward, knowing they played a part in their own demise. Still, that call cut deeply.

“We made a comedy of errors,” Rivers said, his fist pounding the table. “Having said that, we still have the right to win the game if the call says it’s our ball. And that didn’t happen. And that’s too bad for us.”