Clippers Regroup and Look to Redeem Themselves in Game 6 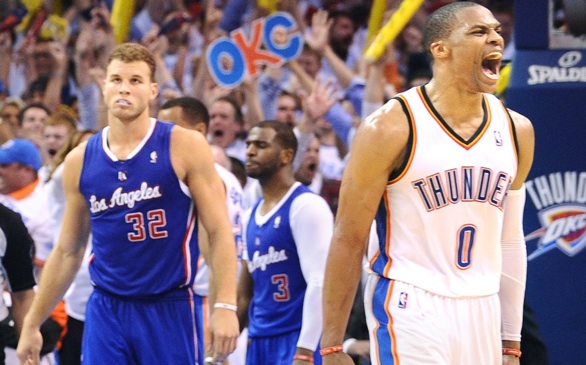 LOS ANGELES — The Los Angeles Clippers’ loss to the Oklahoma City Thunder in Game 5 rocked Chris Paul because of his blunders in the final seconds, leaving the All-Star guard in a funk from which he was still trying to recover at practice Wednesday.

Clippers coach Doc Rivers lashed out at the officiating crew in his team’s 105-104 loss Tuesday night in Oklahoma City, but he escaped being fined by the NBA for his comments and was more upbeat Wednesday.

Now Paul, Rivers and the rest of the Clippers must regroup after the disappointing loss left them in a 3-2 hole in the best-of-seven second-round Western Conference playoff series.

Game 6 is Thursday night at Staples Center, giving the Clippers a chance to redeem themselves for all they did wrong in blowing a seven-point lead in the final 49.2 seconds.

“Yeah, obviously one got away from us,” Paul said. “But we’ve got an opportunity to try and get it back” Thursday.

After Kevin Durant made a three-pointer with 43.7 seconds left, Jamal Crawford missed a layup.

Russell Westbrook grabbed the rebound and threw the ball ahead to Durant, who scored on a driving layup with 17.8 seconds left to pull the Thunder to within two points.

After that, things turned horribly wrong for Paul.

Thinking he was going to be fouled, Paul said, he was trying to put up about a 50-foot three-pointer in hopes that he would get three free throws.

Instead, Westbrook stole the ball from Paul with 13.9 seconds left.

“That’s on me,” Paul said. “As Doc told me, I got in my own way, thinking the game too much. They usually don’t even give me that (three-point) call anyway, so it’s probably something I’ll never do again.”

After the steal, Westbrook passed the ball ahead to Reggie Jackson.

Then came the controversy. Jackson was stripped of the ball by Matt Barnes, with the ball appearing to go out of bounds off the Thunder guard’s hand while he was being fouled by Barnes.

Barnes was not called for a foul. The officials reviewed the play and gave the ball back to the Thunder with 11.3 seconds left.

That drew the ire of Rivers, setting him off on postgame rant in which he said his team was “robbed.”

Rivers said Wednesday he had spoken to the NBA about the game, but wouldn’t share what was said.

The NBA issued a statement Wednesday that said in order for the possession call to be reversed, there had to be “clear and conclusive evidence.” But the replay didn’t provide that evidence so the original call stood, with the ball going to the Thunder.

“I was very upset last night and rightly so,” Rivers said Wednesday. “But you’ve got to move on. And that’s basically what I told our guys last night on the plane. We had a little impromptu meeting. I told them, ‘Listen, it doesn’t matter. It’s 3-2. Gotta go win at home and gotta go win on the road.’ So that’s got to be our focus.”

The end of Game 5 didn’t get any better for Paul, who fouled Westbrook as he attempted a three-pointer with 6.4 seconds to play. Westbrook made all three free throws for the final margin.

Paul also didn’t get a shot off in the final seconds, turning the ball over on the last play of the game.

Sensing that Paul was taking all the blame for the loss, Blake Griffin said he and Crawford reassured their teammate on the bus ride to the airport after the game that it wasn’t all his fault.

“So that idea that it’s on him ... I understand what he’s saying, but we still have (potentially) two games left to play. We’ve got to take it one at a time.”