Clippers Can't Shoulder the Weight, Falling in Game 6 to Thunder 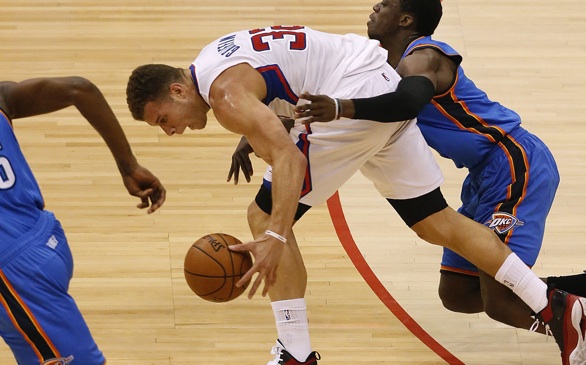 The Clippers may have eventually gotten by the Donald Sterling controversy, but they couldn't get by the Oklahoma City Thunder.

The Clippers lost Game 6 of their Western Conference semifinal series to the Thunder, 104-98, Thursday night at Staples Center, ending their season and sending them home to contemplate the future.

The Clippers lost the best-of-seven series, 4-2, and now they have to wonder who will be back, starting with Clippers Coach Doc Rivers.

He has two more years left on his contract that pays him $14 million, but he was asked whether he will remain as the coach of the Clippers considering that Sterling still owns the team.

"Like I've said before, I'm under contract," Rivers said after the game. "I have no plans on going anywhere, as far as I know."

Chris Paul had 25 points and 11 assists for the Clippers and Blake Griffin had 22 points, eight assists and eight rebounds before fouling out.

But Oklahoma City advances to the Western Conference finals to meet the San Antonio Spurs on Monday behind Kevin Durant's 39 points, 16 rebounds and five assists.

Russell Westbrook had 19 points and 12 assists.

But the Clippers never got close enough to become a threat again.

"The locker room was not very good after the game," Rivers said. "That was tough. That was tough to see for me as one of their leaders. Wish I could have done more for them."

Rivers said Paul "took it hard" after the loss.

"I just feel awful for him," Rivers said. "He's the spirit of our team. Right now, his spirit is broken. He's going to have all summer to work and get ready for next year. But he'll be ready. He'll be better next year."

The Clippers had to deal with Sterling making disparaging comments about African Americans that led to the NBA fining the owner $2.5 million, banning him for life and trying to force him to sell the team.

That was something the Clippers had to deal with for almost a month, starting in Game 4 of the first-round playoff series against Golden State.

"To tell you the truth, we don't think about that," Paul said. "That's the least of our worries right now is him. We just lost a damn series. I'm sorry, but we don't care about that."

Paul stopped and looked at Griffin next to him at the podium.

"When I came out and laced up for a game and was playing, I didn't put much thought into him," Griffin said about Sterling. "I played for my teammates. I played for the fans, the people that are working for us. He's like somebody I never really knew."

Paul interjected: "That was the last thing on our mind. We give him too much attention as it is."