Dodgers Outfielder Yasiel Puig is Listening to His Critics 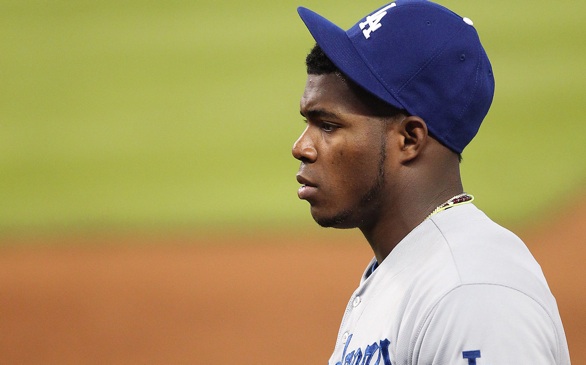 Shortly after the Dodgers’ position players reported to spring training, Yasiel Puig shared his goal for the 2014 season with hitting coach Mark McGwire.

Where would the mercurial 23-year-old set the bar after an up-and-down rookie season, a controversial off-season, and no apparent guarantee of steady playing time in an outfield with Andre Ethier, Matt Kemp and Carl Crawford?

Puig said he wanted to be the National League’s Most Valuable Player.

“I’m not surprised by anything,” McGwire said. “That’s how good he is.”

To reach his goal, one thing was clear: Puig could not be the same player who struggled mightily in the final weeks of 2013. Opposing pitchers had gained the upper hand in the game of cat-and-mouse. The league had adjusted to Puig, getting him to chase pitches out of the zone, and Puig hadn’t responded yet.

Under the guidance of McGwire and his veteran teammates, Puig has responded with a different approach — and it’s working. Puig’s batting average (.324), on-base percentage (.416) and slugging percentage (.561) have all improved over his rookie year.

Going into the Dodgers’ game today against the Arizona Diamondbacks, Puig has a 14-game hitting streak. Since the streak began he has a .411 batting average and a .507 on-base percentage. Puig has driven in almost twice as many runs (17) as he’s scored (nine), despite batting second every day.

Prior to the streak, Puig never went more than one game without collecting a hit. So what is this new approach all about?

“You have to pick a side of the plate,” McGwire said. “You can’t hit 17 inches every day. We talk about the game plan prior to the game. He’ll go over that game plan and he’ll make adjustments throughout the game. That’s probably the most important thing.”

As a rookie, “free swinging” was a good way to describe Puig’s approach. According to the website FanGraphs.com, he swung at 37 percent of pitches outside the strike zone in 2013. This year, he’s down to 28.7 percent.

That’s partly a function of the divide-and-conquer approach to the strike zone and partly because Puig is seeing fewer good pitches to hit. Give Adrian Gonzalez partial credit, too.

Gonzalez and Puig, whose lockers adjoin in the Dodgers clubhouse, have a bet going before each series to see who will draw the most walks. In 36 games this season, Puig has drawn 19 walks. (Gonzalez has 17.) Puig didn’t draw his 19th walk as a rookie until his 56th game of the season.

Gonzalez declined to disclose the stakes of the wager.

“Anything to make him enjoy the pleasure of a walk,” he said, smiling.

There’s more to the equation than Puig’s desire to draw a walk, win a bet, or even to win the MVP award.

Puig’s ability to study an opposing pitcher was barely tested last year. Because there really wasn’t a book on Puig when he debuted, finding the holes in his approach was a bit like throwing darts. Thirty games into his career, Puig was batting .420.

Now, opposing pitchers have plenty of data on Puig. It started to show during his slump last September. After straining his right knee in a game in Denver, Puig batted .195 over the final 26 days of the regular season.

This year, McGwire has been impressed with Puig’s response. Absorbing data isn’t as sexy as making a diving catch, hitting a home run, or flipping a bat, but it’s just as important to winning an MVP award. Maybe more.

“Me and (assistant hitting coach) John Valentin have a chart and things that we talk about prior to each series,” McGwire said. “We talk to the hitters as they go up to the plate, what to expect, this is what to do, where they usually live.

“I don’t think people give (Puig) credit for how smart he is. They see some of the things that he does, and they assume. But he is one smart individual and I think you’re just seeing the tip of the iceberg right now.”

Dodgers manager Don Mattingly has said repeatedly that Puig’s future is in the middle of the batting order. So far, Mattingly is content to keep Puig in the No. 2 slot. Dropping to third or fourth isn’t in the near future for Puig, through no fault of his own.

“Our situation is going to keep telling us what we’re going to do with him,” Mattingly said. “Right now, there’s no reason to switch guys around.”

In March, Puig initiated a meeting in which he asked for constructive criticism from his teammates. He’s still listening.

“Gonzo and Hanley (Ramirez) and (Juan) Uribe, those guys have been really important to him,” McGwire said. “That helps him out, talking about how these pitchers are pitching too. It’s been a great team effort.”