Steve Chong Finds Out That Suicide is a Bad Idea 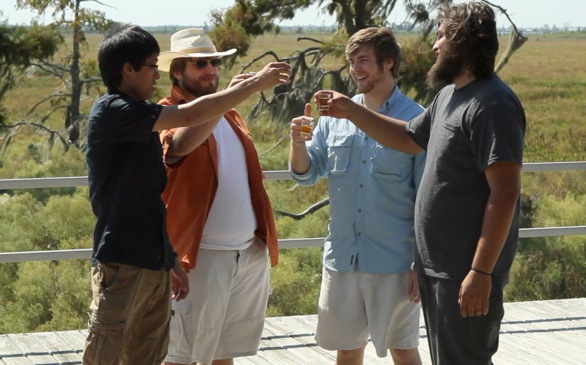 When Steve messes up a tiger roll at the sushi joint he works at, he not only gets fired but he blows his chance with a waitress he likes by snubbing her effort to console him.

And it doesn’t seem like much of a thing that Steve writes his mistakes down on index cards until it is revealed that an entire wall in his apartment is plastered with them.

To top off his overreaction to every little setback, now he has a gun. Faced with a "hopeless situation," Steve is fidgeting with the gun when the phone rings, and the idea of a weekend at a lake house with three male friends causes him to put the firearm down.

Turns out, though, that Steve has taken the gun with him to the lake and intends to commit suicide in front of his pals.

Catching wind of what Steve is up to, the three go to hilarious lengths to cover up every sharp object. The mounted deer antlers end up with foam rubber on their tips, and steak knives are hidden, resulting in the guys having to chew the steaks like cavemen.

Adding to the tension is the fact that two of Steve’s pals do not like each other, and they’re sniping and fighting throughout.

Ultimately, Steve whips out the gun, and you’ll have to see the film to find out what happens from there.

While the notion of suicide is not portrayed in a frivolous manner here, there is lots of dry humor, and that makes this independent film starring unknown actors very palatable.