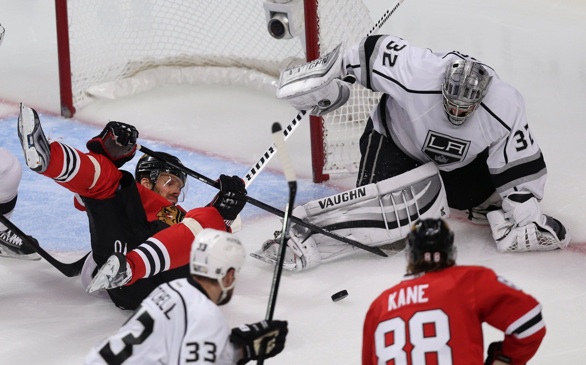 They have become so expert at moving on, from the highs after series victories and the lows after devastating losses.

The Kings mute their emotions and simply get on with it.

Except Moving Day never works quite so well against the Blackhawks. Chicago defeated the Kings, 3-1, in Game 1 of the Western Conference finals Sunday afternoon at the United Center, keeping its home playoff record impeccable (7-0) this spring.

The Blackhawks have won eight of their last nine games against the Kings, including last season's conference finals, in which Kings star Anze Kopitar was held to two points in five games -- and both those came in Game 5.

The Kings were trying to push through a quick turnaround, Coach Darryl Sutter's team starting this series less than 40 hours after its Game 7 victory over the Ducks on Friday night.

"I think we played fine. As Darryl would say, 'OK is not OK,'" said Kings defenseman Willie Mitchell, who returned to action for the first time since suffering a leg-muscle injury in Game 6 of the first round against San Jose, with Matt Greene coming out of the lineup Sunday.

"It's a real good hockey club over there, so you have to play a great game to beat them. We'll look to regroup and do a better job."

Game 2 will be Wednesday night in Chicago, and the Kings' regrouping effort will start with the likes of Kopitar and Marian Gaborik. Kopitar, who is leading the NHL in playoff scoring, was kept off the score sheet for only the second time in 15 playoff games. He was not credited with a shot on goal. His high-scoring linemate Gaborik had three shots on goal but no points.

"I don't think [the Blackhawks] are doing anything different," Kopitar said. "We're going first line on first line. They want to do the same thing as we want to do, check and control the puck as much as they can. We've got to do that better in Game 2."

That was the game within the game: Chicago's top line centered by captain Jonathan Toews with wingers Marian Hossa and Bryan Bickell vs. Kopitar and wingers Gaborik and Dustin Brown.

Blackhawks fans would suggest Toews scored twice Sunday, but only one of them counted. If his second-period goal had stood, Chicago would have led 2-0 at 3:22. But it was disallowed after officials concluded Toews had made incidental contact with Kings goalie Jonathan Quick before the puck crossed the goal line.

Toews would later score -- for real -- with 3 minutes 50 seconds remaining in the game to make it 3-1. With the Kings pushing for the tying goal, he converted on a three-on-one, beating Quick with a shot from the right circle.

The go-ahead goal came from Chicago defenseman Duncan Keith at 11:54 of the second period, making it 2-1. His shot deflected off the stick of Kings forward Trevor Lewis and hit the ice, too.

"It hit Trevor's stick and I guess the guys were saying it hit the ice, then like a Frisbee, just bounced back up," Kings center Jarret Stoll said. "Bounces happen. I was right there. I was going to block that shot. It went off his stick and then the ice. A tough goal. Quickie would usually have those.

"When it bounces like that, it's tough. But they shoot the puck and they put themselves in the right positions. We've gotta do that."

The lone Kings goal came 1:13 after the disallowed Toews goal, via some nice work from the combination of wingers Tanner Pearson and Tyler Toffoli. Toffoli redirected Pearson's centering pass to make it 1-1 at 4:35 of the second.

The Kings outshot the Blackhawks, 17-6, in that period but appeared to fade, with a mere four shots in the third when they were trying to push for the equalizer. Center Mike Richards set up Toffoli at 2:22 in the third on a breakaway and Toffoli had Blackhawks goalie Corey Crawford beaten but hit the left post.

"We had a chance," Richards said. "We shot ourselves in the foot a bit on their goals. Give them credit. They're an opportunistic team. We made a couple mistakes and they ended up in our net."