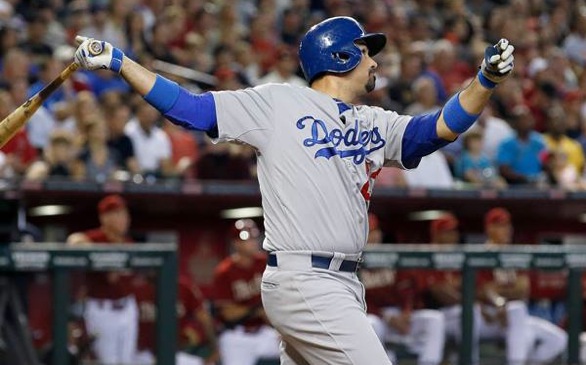 With another series completed and lost Sunday, Hanley Ramirez continued to wait for the season to change course.

"I'm just waiting for my month," Ramirez said. "First for my week, then for my month. Our month."

Other players made similar statements last week and the week before that, but the Dodgers remain stuck. Their most recent week concluded with a 5-3 defeat to the last-place Arizona Diamondbacks, their second loss in a three-game series at Chase Field.

Baseball's most expensive team has lost six of its last eight series and is only one game over .500. The Dodgers trail the first-place San Francisco Giants by five games in the National League West.

"We're so talented and I think sometimes we expect the talent to just take over sometimes," starting pitcher Dan Haren said.

Manager Don Mattingly said he didn't sense any lack of urgency on the part of his players.

However, Mattingly also said, "Until we can grind out wins, we're in trouble. You've got to be ready to play every day, play with some sense of urgency that every game's going to matter, every game counts and you don't have time to wait. I don't think we can wait for a run."

The elements appear to be in place.

No. 1 starter Clayton Kershaw and catcher A.J. Ellis recently returned from injuries that sidelined them for more than a month. Third baseman Juan Uribe was back in the lineup this week after straining a hamstring. Hyun-Jin Ryu is scheduled to rejoin the rotation Wednesday.

And if only for a day, the middle of the order returned to form.

No. 3 hitter Ramirez blasted a first-inning home run against Josh Collmenter to move the Dodgers in front, 1-0. The home run was the sixth for Ramirez, who is batting .251.

The Diamondbacks tied the score in the second inning, but cleanup hitter Adrian Gonzalez pushed the Dodgers back ahead with a two-run home run in the third. Gonzalez's last home run was May 1.

But as has often been the case with these Dodgers, they fixed something, only for something else to fail.

In this particular game, the Dodgers were let down by defensive miscues and an inability to score over the final six innings.

In the second inning, Yasiel Puig misplayed a line drive by Cody Ross, Uribe double-clutched a ball to turn a routine grounder by A.J. Pollock into an infield hit and Ramirez made a throwing error on a double-play attempt. The mistakes resulted in a run that tied the score, 1-1.

The Diamondbacks went ahead, 5-3, in the fifth inning when Haren served up a two-run home run to Eric Chavez.

Pinch-hitting in the sixth inning with runners on first and second, Kemp grounded into an inning-ending douple play.

Kemp's next at-bat was in the eighth inning, this time with two outs and the bases loaded. He lined out to second base.

"Just hit it hard right at somebody," Kemp said.

For the Diamondbacks, the series victory was their first at Chase Field this season. Before dropping games to the Diamondbacks in each of the last two days, the Dodgers were 8-1 against them.

"I'm not worried, man," Kemp said. "Nobody's worried, man. We had a bad series. Turn the page, have a good off-day tomorrow and get ready for New York."

Kemp's faith was shared by Ramirez.

"We're going to get hot," Ramirez said. "What we need is one win, then go from there. In a couple of games, we'll be right there."