Mushroomhead: The Righteous and the Butterfly 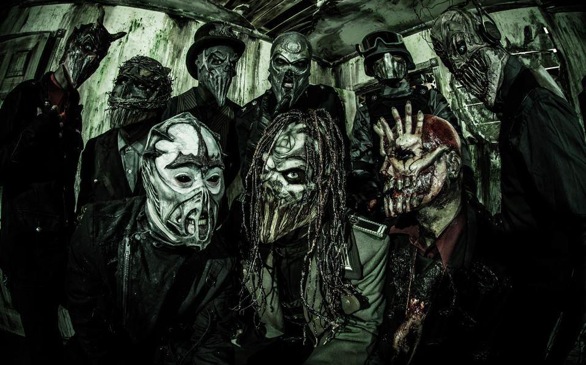 A few changes in the Mushroomhead line-up this time out: vocalist J Mann is back behind the mic after a decade-long hiatus, and new guitarist Church and new bass man Dr. F are also on board.

The guys have fine-tuned their sound a little too, but fans needn’t worry that much since the industrial metal here is as tough and punchy as ever.

With its barrage of grinding guitars, pounding drums and angry sounding vocals, Mushroomhead sounds as if it would just as soon throw you in the wood chipper as it would actually apologize on album opener “Our Apologies.”

“Qwerty” is an interesting departure from the bombast; the song is still full of anger, F-bombs and the thrashing of the band’s three drummers, but there’s also a very catchy and commercial appeal amongst all the riffing, thanks to a rhythmic sing-song vocal line that conjures visions of evil, marching toy soldiers.

There are mellow melodic tunes too, like the brief “Childlike,” which is not surprising for an emotional album that’s dedicated to late Mushroomhead guitarist J.J. Righteous (the “Righteous” referred to in the album title) and Vanessa Solowiow (the “butterfly”), late wife of drummer Skinny.

UnSaid Fate singer Jackie LaPonza adds a feminine touch to the head banging “We Are the Truth,” “Graveyard Du Jour” is just as spooky as it is heavy, and “Out of My Mind” is delightfully thrashy and pummeling.

It’s 20 years in for these industrial titans now, but there’s not a speck of rust to be found on The Righteous and the Butterfly.