Lakers Don't Strike it Rich in NBA Lottery, Drop from Sixth to Seventh 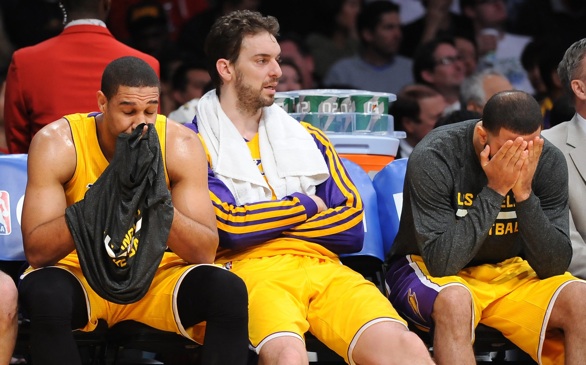 Ring up the Lakers' 56th loss of the season.

Their string of bad luck continued Tuesday when they dropped a spot in the NBA draft, from sixth to seventh, after the lottery unveiled one big winner that wasn't them.

The Cleveland Cavaliers vaulted from the ninth pick to the top overall selection, bucking slim 1.7% chances they would get it.

The Lakers declined immediate comment, but Boston Celtics executive Danny Ainge, whose team will pick sixth, told reporters he didn't think there was anyone who would "come in and change the face of our franchise."

Franchise-changer or not, this is an important pick for the Lakers to nail at the June 26 draft. They don't have a second-round pick, which would have been 36th overall, because of the Steve Nash trade and don't have a first-rounder next year because of the Nash deal.

The injury-dogged Lakers got only six games out of Kobe Bryant this season and 15 from Nash on the way to a 27-55 record that was the sixth worst in the league.

They can forget about taking anyone from the draft's consensus top three: Joel Embiid and Andrew Wiggins of Kansas, and Duke's Jabari Parker.

Each has his question marks: Randle needs to improve his defense; Vonleh had great measurements at the draft combine but didn't always excel on the court at Indiana; Smart needs to shoot better from long distance; and Gordon has athleticism but is raw outside of the paint.

Australian point guard Dante Exum, who shares the same agent as Bryant, is expected to be gone before the Lakers pick.

Not even bobblehead dolls of Chick Hearn and Jerry Buss could help James Worthy on Tuesday. Worthy, the Lakers' last No. 1 overall pick (in 1982), was the team's representative at the lottery in New York.

They had a 43.9% chance at staying at No. 6, which suddenly looked good when it was initially revealed Cleveland jumped up from ninth to an unspecified destination in the top three. The Cavaliers also won the first pick in last year's draft, taking forward Anthony Bennett, who averaged only 12.8 minutes as a rookie.

Before the first ping-pong ball was even pulled, there was a 30.5% chance the Lakers would fall to seventh.

It actually could have been worse. There was a 4% chance of their dropping to eighth and a 0.1% chance of sliding to ninth.

Milwaukee finished with the league's worst record (15-67) but slid from first to second thanks to Cleveland's lucky jump. Philadelphia had the second-worst record and endured a 26-game losing streak but fell to third in the lottery.

The Lakers haven't kept their first-round pick since taking Javaris Crittenton at No. 19 in 2007. Their last lottery pick was Andrew Bynum, taken 10th overall in 2005.

They'll get another chance at a top-10 pick next month.