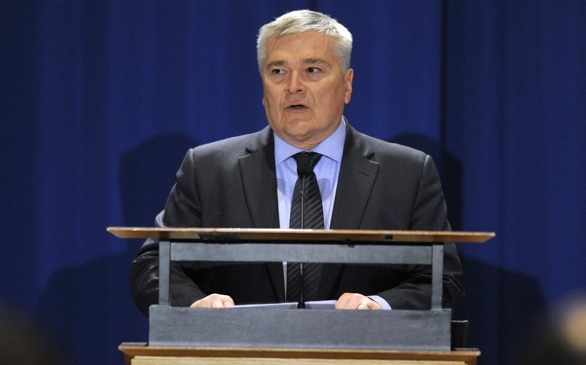 Schools often use judicial or "honor boards," which can include students and others who are not adequately trained, to hear sexual assault cases and rule on whether the victim or the alleged perpetrator is telling the truth, said Eric J. Barron.

Schools in effect are being asked to do a job normally left to the courts, he said.

"This is not a good system to approach what is expected of us" under federal law, Barron said during a meeting with the Inquirer Editorial Board. "I think we're going to end up turning around and saying we need professionals who have an investigative responsibility and a decision-making responsibility on penalties."

Asked whether universities should continue to include students on judicial boards, he said: "If you can't guarantee that the students are well-trained and maintain a high level of confidence, that probably is not going to work."

Penn State is one of 55 universities being investigated by the U.S. Department of Education for possible mishandling of sexual assault and harassment cases. Florida State University, where Barron spent the previous four years as president, also is on the list.

The department began reviewing Penn State, which is still recovering from the 2011 indictment and subsequent conviction of former assistant football coach Jerry Sandusky for sexually assaulting young boys, some of them on campus, this year.

Barron pointed out that the list does not spare any type of school. Ivy League universities, public universities, small colleges and large ones are all on it.

"This suggests that the set of rules that are out there are actually very difficult for universities to deal with and manage," he said.

Barron, who officially started as president May 12, is visiting media organizations around the state touting his areas of focus, including promoting excellence and expanding access to Penn State.

Barron also talked about the importance of controlling costs and his aim to start the next budget year, which begins in July, with a plan to save a certain amount of money in the year ahead.

But he spent a large portion of the hour-long interview answering questions about sexual assault.

"I believe that protecting the victims, protecting anybody who sees themselves as a victim, is the highest priority," said Barron, a noted climatologist who previously spent 20 years at Penn State.

But Barron said the cases often are complicated and protecting the privacy of the victim while aggressively investigating an accusation can be difficult. He also noted that the majority of sexual assault cases involve alcohol abuse by the perpetrator or victim or both.

"I don't know [whether] I can look you in the eye and say I know how to fix the alcohol problem that is going on in this country," he said. "I don't know of a single university that doesn't have that problem."

Barron also defended Florida State's handling of a rape accusation against star quarterback Jameis Winston. When the matter surfaced, Barron said he would wait for the legal outcome. Winston was not charged and went on to lead the school to a national championship in January.

But the New York Times subsequently reported that the university, in apparent violation of federal law, did not promptly investigate the accusation.

But he said that some alumni saw a conspiracy and believed the university did not act right away so that Winston could continue to play football.

In retrospect, he said, he wishes he had made the university's position clear from the time the accusation surfaced.

"I definitely believe I would have been proactive on what the university was going to do and stating that out loud at the beginning," he said.