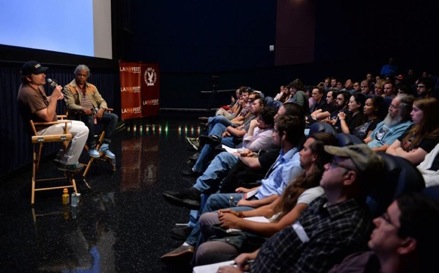 This summer at Downtown Los Angeles’ LA Live, the 2014 Los Angeles Film Festival will be celebrating its 20th anniversary from June 11 to 19.

Already bringing a diverse slate of nearly 200 features, shorts and music videos from 40 countries, Film Independent will also be launching a new special section – LA muse – in this year’s celebration.

Attendees will also have access to the festival's many events, including free screenings, "Coffe Talks," industry talks and so much more.

The 2014 festival line-up was announced on May 6, but here are some highlights you definitely don’t want to miss this year!

LA Muse: Hollywood, Sunset Boulevard, Beverly Hills—Los Angeles has always been a great inspiration for filmmakers and artists. In this city, thousands of film lovers find their voices, write their stories and perfect their crafts. LA Muse, a cinematic reflection, gives you the most impressive memories about the City of Angels through a program of films, performances and panels.

Inner Demons
(Fri., June 13 at 10:00 p.m., Regal Cinemas 9)
A teenage girl uses drugs to deal with her unnatural, evil feelings growing inside her. When she agrees to rehab, the demon emerges. How can she get through it?
Directed By: Seth Grossman

Echo Park
(Sat., June 14 at 6:45 p.m., Regal Cinemas 11)
The romance between a Beverley rich girl, Sophie, and an Echo Park poor boy, Alex, driven by uncertainty compels them to reassess where each belongs.
Directed By: Amanda Marsalis

Dreams Are Colder than Death
(Tues., June 17 at 7:00 p.m., Regal Cinemas 12)
Fifty years have passed since Dr. Martin Luther King presented his dream. Now, we ask: have the hopes and utopian desires of that dream faded away? What does it mean to be Black in America today?
Directed By: Arthur Jafa

Festival Conversations: Through festival conversations, you get the chance to talk to filmmakers, panels and even movie stars!

Music in Film: A Sound Journey with Atticus Ross
(Fri., June 13 at 8:00 p.m., GRAMMY Museum)
Have a great evening of electronic music and conversation with Oscar-winning composer Atticus Ross (The Social Network, The Girl with the Dragon Tattoo and the upcoming Gone Girl).

Funny Talk: A Conversation with Key and Peele
(Sun., June 15 at 8:00 p.m., Regal Cinemas 11)
Join funny men Keegan-Michael Key and Jordan Peele (the stars of “Key and Peele”) for a journey through comedy and movies.

Coffee Talks:
(Sun., June 15, Luxe City Center Hotel)
Sunday at the L.A. Film Fest is coffee time. This year’s “Coffee Talks” includes four sessions featuring some of today’s most fascinating directors, actors, composers and screenwriters discussing their craft in a fun, relaxing atmosphere. And of course, there will be coffee for everyone.

Special Pre-Screenings: Two great films will warm up the festival on June 9 and 10. Don’t miss the opportunity to see this summer’s hits before anyone else!

22 Jump Street
(Tues., June 10 at 7:30 p.m., Regal Cinemas 1)
After making their way through high school (twice), big changes are in store for officers Schmidt and Jenko (played by Jonah Hill and Channing Tatum) when they go deep undercover at a local college.
Directed By: Phil Lord, Christopher Miller

The Film That Got Away: During the festival, you not only have the chance to see some of the newest released movies but also reminisce on some great films that got away.

Caterpillar
(Wed., June 18 at 7:00 p.m., Regal Cinemas 12)
Winner of the 2010 Berlin Film Festival's Silver Bear for lead actress Shinobu Terajima, this late-career triumph from legendary Japanese director Koji Wakamatsu uses the ordeal of a faithful war widow forced to care for her mutilated husband to deliver a searing broadside against Japan's militaristic past.

Short Film Competition: More than 40 short films, including a unique section devoted to music videos, are going to show in the festival. Definitely go check them out, and let those young talents amaze you!

As you can see, the 2014 LA Film Fest is sure to provide you with a fun, diverse selection of film treats!