California's Latino Students Among the Most Segregated in the Country, Says UCLA Report 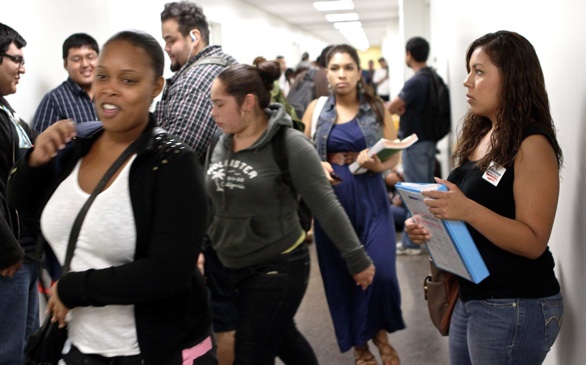 More than half of Latino students in California attend “intensely segregated” K-12 schools, or those that have a white population of 10 percent or less, according to a new report by The Civil Rights Project at UCLA.

That figure of 51 percent is the second highest in the United States and well above western and national averages, according to “Segregating California’s Future: Inequality and its Alternative 60 Years After Brown v. Board of Education.” While African-American students were far more segregated here than Latinos during the civil rights era, Latino segregation has grown rapidly and is now “very high” as well.

Meanwhile, thirty-nine percent of blacks in the state attend schools with a white population of 10 percent or less.

“What we’ve seen for Latinos is an incredible increase in isolation from white and Asian students and an extremely high exposure to poverty,” said Gary Orfield, co-director of The Civil Rights Project at UCLA and co-author of the study. “We also see a significant exposure to linguistic segregation, which we call triple segregation (after race and income levels.) It’s gotten much worse.”

In fact, the state has seen a dramatic increase in the segregation of Latinos, who on average attended schools that were 54 percent white in 1970 but now attend schools that are about 84 percent nonwhite. Latinos here also have fewer white classmates than Latinos in any other state; the typical Latino student here attends a school whose population is just 15.6 percent white, the study found. Statewide, the proportion of K-12 schools that are “intensely segregated” has more than doubled from 15 percent in 1993-94 to 31 percent in 2012-13.

While white students’ contact with nonwhite and poor students has increased as a result of dramatic demographic changes, black and Latino students are strongly concentrated in schools that have significantly lower quality as measured by Academic Performance Index (API) test scores. On the other hand, a much larger share of whites and Asians attend the most highly rated schools and are thus the most prepared for college, according to the study.

Black and Latino students attend schools that on average have more than two-thirds poor students, while whites and Asians typically attend schools with a majority of middle-class students. California ranks as the most segregated state in terms of the share of blacks who attend majority white schools. Only one-sixteenth of black students had this experience in 2011.

The most segregated large school districts in the state are in the Los Angeles-Inland Empire region, while the most integrated are in the Sacramento and Fresno areas. The study found that housing segregation was a primary cause of school segregation and recommended that any long-term policy to foster integration “must determine how to enforce fair housing and affordable housing policies more effectively.”

The report, if it gets the attention it deserves, may stand out as one of the landmark studies that presents data that cannot be ignored, said Los Angeles Unified School District Board Member Steve Zimmer. It’s important because it shows the compounding effects of both racial and economic isolation and segregation, he said.

“This is not accidental, this is a direct result of institutionally racist housing and economic systems and we can’t pretend that schools don’t exist within these systems,” Zimmer said. “If we are not intentional about addressing the circumstances of children who are living out the consequences...we are basically placing them at severe risk of being victims of the system that they had no role whatsoever in creating.” Zimmer said.

Programs that intentionally promote diversity and integration, such as Spanish-language dual immersion programs, are one way to foster integration, he said.

Segregation is a political problem that nobody wants to talk about but one that is in need of practical solutions, said Constance Rice, co-founder of the Advancement Project.

It’s important for people to understand the importance of crossing socioeconomic lines and mixing and why that’s essential for multi-racial democracy. If housing cannot be integrated, then there should be an effort for athletic teams and drama clubs to be integrated by for example creating city wide leagues and cohorts to create more integrated groups.

“There’s nothing like athletics to create interracial camaraderie, to get people out of their ghettos,” she said.