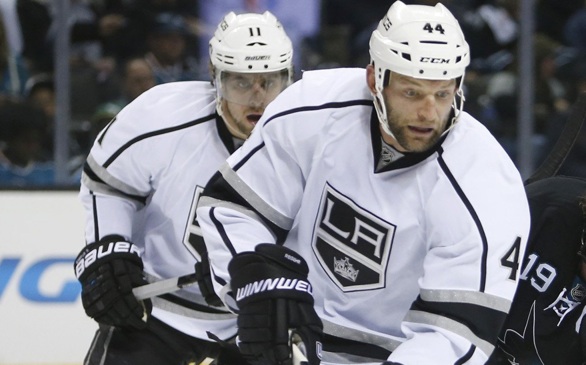 Kings Coach Darryl Sutter said the lower-body injury keeping Robyn Regehr out of the lineup is a knee injury and that the veteran defenseman hasn't resumed skating, though Regehr had said he hoped to return to the ice Thursday.

Regehr hasn't played since Game 1 of the Kings' second-round series against the Ducks. Fellow defenseman Willie Mitchell suffered an injured leg muscle during Game 6 of the first round against the San Jose Sharks and missed the Kings' seven-game victory over the Ducks. Mitchell returned as the Kings split the first two games of the Western Conference finals against the Chicago Blackhawks.

"When Robyn's ready to skate, he'll skate," Sutter said Thursday at the team's practice facility in El Segundo. "It's a knee injury and he'll make that decision. If he could play on one leg, he would. He showed it to us last year in the playoffs and I've seen enough of him in his career. ... If there's a way to skate, he'd be playing."

Regehr's prolonged absence is a reminder of the Kings' good fortune in being able to play the same six defensemen throughout their 2012 Stanley Cup run. They have used eight defensemen this spring and had to juggle their defense pairs.

"That's what it takes sometimes. You're not going to get lucky like that throughout the playoffs," defenseman Alec Martinez said after Game 2 against the Blackhawks. "It's playoff hockey and it's pretty rough out there. I think we've got a lot of depth in this room."

Tyler Toffoli shrugged off the heavy lifting he has been doing, both in his insistence on packing and carrying his own equipment bag and with what he's doing to help the Kings win games.

The 22-year-old forward scored his fifth playoff goal Wednesday by pounding in a deflected, bouncing puck. It was the Kings' fourth goal in 10 minutes 45 seconds and effectively sealed the Blackhawks' fate in the third period.

In the first period, amid pressure from Chicago center Peter Regin, Toffoli used his stick to prevent the puck from getting past goaltender Jonathan Quick for what might have been a 1-0 Blackhawks lead.

"I saw it go in the air, figured it was going to bounce right in," Toffoli said. "Went off [Regin's] helmet and his stick. Thank God my stick was there. ... I was pretty lucky, surprised it happened. But I'll take it."

After the game, Toffoli and Martinez toted their own bags for the equipment managers to load onto the plane for the trip home.

"That's never been a huge deal for me, I was used to carrying my bag everywhere I went as a junior," Toffoli said. "Just trying to help out the trainers a little bit, make it easier for them, because they do so much for us. Me and Marty have talked about it before, it's something we've always done, and you try to help with little things. I think that goes a long way with the trainers."

The Blackhawks met the media in Chicago before traveling to Los Angeles. Forward Ben Smith said they would use the memory of their third-period collapse Wednesday as motivation to play better in Game 3 on Saturday at Staples Center. "We want the pain we felt to sink in," Smith said. "Having said that, we want to move forward and know that for a good portion of that game we were in control, we were playing well." ... A scoring change on the Kings' third goal Wednesday, by Jake Muzzin, gave the assists to Martinez and Anze Kopitar instead of Martinez and Marian Gaborik. ... Greene, asked if he watches the Dodgers to relax on off-days: "If I had Time Warner [Cable], I would."