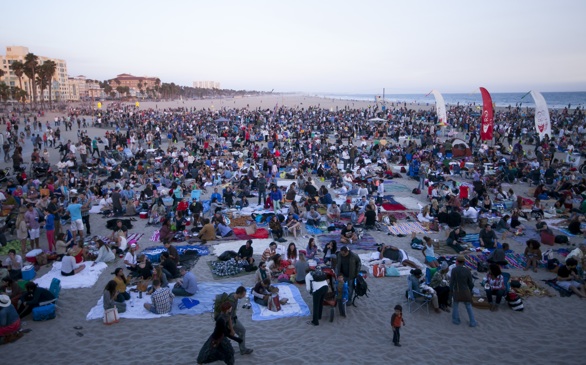 Attending concerts can be pricy, especially for a broke college student who’s working part time during the summer. Instead, why not enjoy some new indie or folk music for a very low price or even free of charge?

Here are some budget-friendly summer concerts in L.A. you shouldn’t miss:

To join in on the fun, you only need to bring $10 for parking. The event itself is free, but be sure to get there early and find a good seat before the crowd arrives (seating is on a first-come, first-served basis).

One band to check out this summer is the Haden Triplets. This trio, performing Thursday, Aug. 7, includes triplets Tanya, Rachel and Petra Haden. The sisters just released their self-titled debut album, and Rolling Stone said these women “spin a sisterly folk spell.”

Another show you’ll want to catch features Flaco Jimenez and Max Baca & Los Texmaniacs. They will be performing on Aug. 14. Jimenez is a five-time Grammy winner and accordionist, so you know you’re in for a treat!

This is the place to be when you want to hear new, classic and contemporary artists while watching a beautiful beach sunset.

Yuna is a singer-songwriter who will dazzle you with her soft vocals, acoustic guitar and pop-alternative-folk-rock sound on July 17. On July 10, indie pop band Cults, whose “Abducted” and “Go Outside” videos have more than one million views each on YouTube, will surely make you want to dance barefoot on the beach. And rising soul singer Charles Bradley, performing on Sept. 11, has been known to put on “some surprisingly fluid dance moves” during his intimate shows.

The lineup is already posted on its website, so you can decide what artists to see and who knows—maybe you’ll end up falling in love with this “music of soul.”

Here’s a little sneak peek of what to expect:

Sara Gazarek will mesmerize the audience with her performance on June 27 at 6 p.m. This singer-songwriter received acclamation from many and has captivated the jazz world. She and her trio continue to fuse together the sounds of this new generation with the old one, creating a sound that is relatable for all ages.

Another performer who’s great at blending some of the old with the new is woodwind specialist Katisse. He combines jazz, hip-hop, pop and world music, creating a high-energy experience for his band and audience. Plus, he’s toured with musical artists such as Prince and Dr. Dre—you know he’s going to put on an amazing show!

The Echo
1822 Sunset Blvd., Los Angeles
All summer
Want to be the first to hear new up-and-coming artists? If so, then spend your summer nights at the Echo.

Most concerts at the Echo require a ticket purchase; however, this venue offers free concerts as well, it just depends on the show. There is even a one-month stint that offers free shows, but you have to follow the Echo on Twitter (@theechola) to receive the notifications. This will make for a spontaneous musical night out.

One band performing this summer at the Echo is Movement. You might not have heard of this Australian trio, but you should definitely check these guys out on Tuesday, June 24. With achingly soulful vocals, calm beats and an atmospheric sound, Movement's music is a bit similar to the sounds of Jai Paul and Rhye. Tickets for Movement's Echo show cost only $10 when purchased in advance ($12 at the door).

For a little more energy, check out Phox, a breath of fresh air. Lead vocalist Monica Martin’s deep, soulful voice is haunting, and the band’s chemistry is evident, as the members seem to have so much fun when they're performing together. Phox takes the stage on Tuesday, July 1 for the same price as Movement’s show.