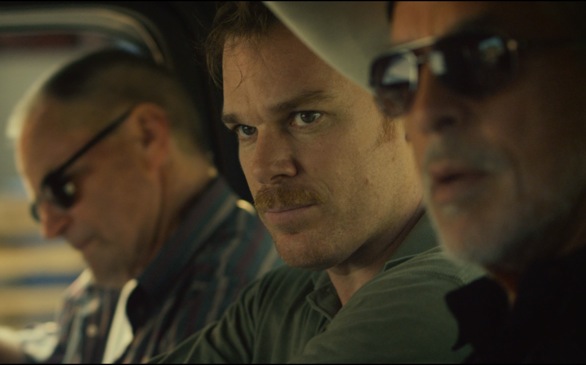 LOS ANGELES — Only in Texas could the neo-noir of Cold in July be so believable.

I say that as a fan of both the state and the style. This striking new entry in pulp fiction stars Michael C. Hall, Sam Shepard and Don Johnson in a tangled tale of crime and punishment that mines the Lone Star lore of guns and killing.

Written and directed by Jim Mickle and based on Joe R. Lansdale’s novel, Cold’s threatening mood puts it in some good company, including the Coen brothers’ Blood Simple (1984), Michael Winterbottom’s The Killer Inside Me (2010) and Richard Linklater’s Bernie (2011). Tense and violent, it grabs you from the first moments and rarely loosens its hold until the last body drops.

Set in summer 1989, the wheels of injustice begin turning when Richard Dane (Hall) shoots a low-life who’s broken into his house. An unassuming small-business owner in a small East Texas town, Richard leads a quiet life with wife Ann (Vinessa Shaw) and son Jordan (Brogan Hall). He’s the last guy you’d expect to even have a gun, much less be vigilante material.

It’s worth noting that Richard frames pictures for a living. And not merely because Richard is about to be inadvertently framed. I like the casual way Mickle slips the metaphor in, as if he’s not insisting, just putting it out there for the taking if you’re so inclined.

Freddy Russell (Wyatt Russell), the man Richard shoots, is at the heart of the mystery. Ben (Sam Shepard), the dead man’s father, shows up to see his son buried and confront the man who put him six feet under. An enigmatic ex-con in sunglasses, he immediately puts Richard on edge with his skulking and stalking.

As is often the case, at least in the movies, Texas lawmen are not to be trusted any more than the criminal element. Richard discovers this when he figures out the man he shot is not the same man the police say he killed. When he decides to take matters into his own hands, things get messy fast.

The tension breaks a little with the arrival of Jim Bob (Don Johnson). An old friend Ben has enlisted to help figure out what’s really happened to his son, Jim Bob rolls up behind the wheel of a red Cadillac convertible that has longhorns, real ones, gracing its grill. Richard, like an annoying little brother, insists he be allowed to tag along.

There is much — including this improbable justice league — that defies logic in the film, which is not to suggest that the illogical isn’t stomach-churning entertainment.

Watching Hall handle a character so out of control, bumbling guns, awkward in nearly all situations, is a real treat and a real change. The actor’s breakout as the tightly wound, closeted gay son in the family business in HBO’s acclaimed drama “Six Feet Under” was followed by his meticulous serial killer in Showtime’s “Dexter,” which wrapped last year.

It’s not that Hall gets to lighten up in Cold, but he does get to loosen up, creating in Richard a hapless hero you can’t help but root for. Meanwhile, Shepard settles into characters so easily, you tend to forget how many different ones he’s played. Ben is all quiet exterior, hair-trigger interior and cowboy through and through.

There is definitely a comic streak in Cold, but it’s always playing in the shadows of the movie’s more sobering themes: What happens to an ordinary man who kills someone and how that death marks him. The cost of police corruption. The legacy of criminal behavior passed from father to son.

Mickle doesn’t have all the answers, but he knows what to do with a great cast, a gun and the dark side of human nature.