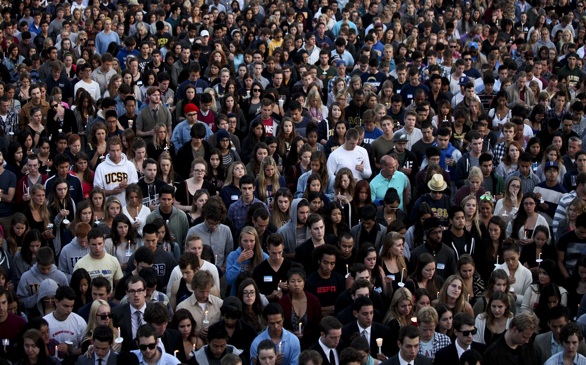 Thousands of students continued to share their grief this week at UC campuses across Southern California, where vigils were being organized to honor the six victims killed in the deadly Isla Vista rampage carried out by Elliot Rodger.

As investigators continued to piece together how the shootings began, students continued to attend vigils and other events planned as part of a "week of solidarity" to honor the victims and to begin the process of healing.

The epicenter of grief, however, remained in the small beachside college town of Isla Vista, where Rodger, 22, stabbed and shot to death six UC Santa Barbara students Friday night.

His roommates -- identified as Cheng Yuan "James" Hong, 20, George Chen, 19, and Weihan "David" Wang, 20, all students at UCSB -- were found dead with multiple stab wounds inside the two-story Capri Apartments.

Police say that Rodger killed them before embarking on a shooting rampage across Isla Vista that left three other UC Santa Barbara students dead and 13 others injured and culminated in Rodger's suicide.

The killings, police say, were carried out as part of what he called his "day of retribution" against the world, which he had laid out in a 137-page document.

In his written tirade and in YouTube videos, Rodger blamed his loneliness and misery on the indifference of women and complained of his exclusion from the campus party crowd. But for those who knew them, it is hard to see why that rage had anything to do with the stabbing victims, who were far from avid party-goers.

“Most Asian students here, the Chinese students especially, we are not into the party scene. We are just quiet and studying hard, and I don’t think we should be related to this at all. I can’t figure it out,” said Zhe Lu, a computer science major who knew the victims.

“These are not party guys -- James, David and George,” said Bonan Yan, another computer science major who took classes with the slain men.

After first fatally stabbing his three roommates to, as Rodger wrote, "secure the entire apartment for myself as my personal torture and killing chamber," police say he drove to the Alpha Phi sorority house at about 9:30 p.m. and pounded on the door for more than a minute. No one answered.

In his diatribe, he had singled out the house as "the hottest sorority of UCSB" and claimed that it represented "everything I hate in the female gender."

Failing to get inside the sorority house, Rodger opened fire on women who were standing outside, killing Katherine Cooper, 22, and Veronika Weiss, 19, authorities said.

Rodger drove away in his BMW and gunned down Christopher Michaels-Martinez, 20, another UC Santa Barbara student, at the I.V. Deli Mart, police said.

Sidewalk memorials continued to swell at the crime scenes scattered across Isla Vista, but there were signs Monday of returning normality: young people walking with pizza boxes and biking with surfboards, a group of guys carrying 12-packs of beer, and a student skateboarding with a guitar. Now and then, someone stopped to snap cellphone pictures.

There were also signs of increasing frustration with the media. For days, reporters had been camped conspicuously in the street in front of the I.V. Deli Mart. A row of students held boards above their heads to block the view of the bullet-riddled front windows.

"Our Tragedy Is not Your Commodity," one sign said.

"Remembrance NOT Ratings," said another.

UC Santa Barbara canceled Tuesday classes but said faculty and staff will be on campus to offer support and counseling.