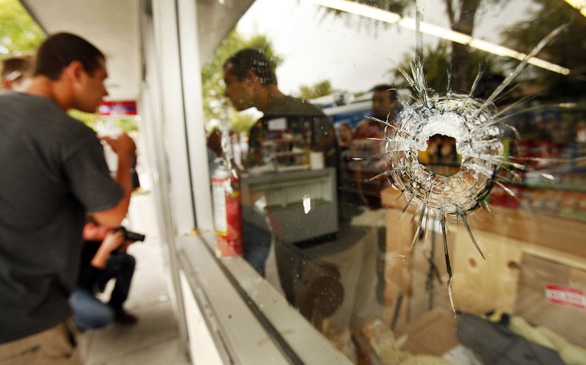 ISLA VISTA, Calif. — In his elaborate blueprint to kill strangers across this beachside college town, Elliot Rodger had vowed to start inside his own charcoal-gray building on Seville Road, with people he knew well: his housemates.

He would kill them first to “secure the entire apartment for myself as my personal torture and killing chamber,” Rodger wrote in a 137-page document detailing what he called his Day of Retribution against the world.

His housemates — identified as Cheng Yuan “James” Hong, 20, George Chen, 19, and Weihan “David” Wang, 20, all students at the University of California, Santa Barbara — were found dead Friday with multiple stab wounds inside the two-story Capri Apartments.

Police say that Rodger killed them before embarking on a shooting rampage across Isla Vista that left three other UC Santa Barbara students dead and 13 others injured and culminated in Rodger’s suicide.

Exactly how the rampage began remains one of the case’s key mysteries. How did a physically unimposing 22-year-old manage to stab three men to death, apparently without drawing anyone’s attention? Police are not releasing any details of their findings in the investigation.

On Monday, students were puzzling over how it could have happened.

Zhe Lu, another computer science student who knew the victims, said: “If a person was in danger for his life, I think he would try everything to escape. From a door. From a window … ”

Wang’s mother, Jane Liu, told KNTV-TV that her son was upset by loud music that Rodger played in the middle of the night and had decided to find another apartment for the next school year.

Liu, a nurse, said her son was planning to spend the summer with his parents in Fremont, Calif. “What can I do without my son?” Liu said. “My son, my whole life, I’m so proud of him.”

Friends said that Hong, Chen and Wang were close friends as well as housemates. They loved playing video games and talking about computer engineering and had a shared Chinese heritage. Hong emigrated to the United States from Taiwan, Wang was from China, and Chen was the son of Chinese immigrants.

In his written tirade and in YouTube videos, Rodger blamed his loneliness and misery on the indifference of women and complained of his exclusion from the campus party crowd. For those who knew them, it is hard to see why that rage had anything to do with the stabbing victims, who were far from avid party-goers.

“Most Asian students here, the Chinese students especially, we are not into the party scene,” Lu said. “We are just quiet and studying hard, and I don’t think we should be related to this at all. I can’t figure it out.”

Taiwanese diplomats and officials from the Chinese Consulate visited Isla Vista on Monday to offer condolences and help to the victims’ families.

Outside the apartment complex Monday, three days after the killings, many of the television trucks had gone away, but two security guards kept watch. At a small sidewalk memorial, which swelled throughout the day with sunflowers, candles and sympathy cards, someone had placed a note to Chen. “Thank you for bringing joy to the people in your life,” it read. “You will be missed. Rest in peace. With love, your childhood neighbor.”

On the surrounding streets, there were signs of returning normality: young people walking with pizza boxes and biking with surfboards, a group of guys carrying 12-packs of beer, and a student skateboarding with a guitar. Now and then, someone stopped to snap cellphone pictures.

By Monday afternoon, there were also signs of increasing frustration with the media. For days, reporters had been camped conspicuously in the street in front of the I.V. Deli Mart, one of the locations where Rodger opened fire. A row of students held boards above their heads to block the view of the bullet-riddled front windows.

“Our Tragedy Is not Your Commodity,” one sign said.

About 9:30 p.m. Friday, police said, Rodger drove to the Alpha Phi sorority house and pounded on the door for more than a minute, though no one answered. In his diatribe, he had singled out the house as “the hottest sorority of UCSB” and claimed that it represented “everything I hate in the female gender.”

“I will punish all females for the crime of depriving me of sex,” he wrote. “I cannot kill every single female on earth, but I can deliver a devastating blow that will shake all of them to the core of their wicked hearts.”

Failing to get inside the sorority house, Rodger opened fire on women who were standing outside, killing Katherine Cooper, 22, and Veronika Weiss, 19.

Childhood friends remembered Cooper as full of energy, unbeatable at foot races, catching the ice cream truck when it rolled through her Chino Hills neighborhood.

“She’d beat anyone who dared to run against her,” said Phoenix Morales, 24, looking out at the cul-de-sac lined with Mediterranean-style red-tiled roofs where they played baseball and soccer. “Then she’d stand there laughing and trying to catch her breath.”

The Rev. Michael Gilsenan, pastor of St. Paul the Apostle Catholic Church in Chino Hills, said Cooper and her sorority “were always reaching out to the poor and the neglected. Now, she’s been gunned down. She would have been the first to reach out to this man who was so lonely. But she never had the chance.”

A note taped to a window at the Cooper home said, “Please, no press. We appreciate your kindness to want to find out about Katie’s life. But we are choosing to remember her in our own way. Thank you. The Cooper family.”

“Katie was a wonderful kid,” said Allen Borcherding, who taught her in his seventh-grade science class at Canyon Hills Junior High School in Chino Hills. “But evil’s on the move.”

For women in the UC Santa Barbara sorority system, Rodger’s rampage — and the hate that fueled it — have introduced a sense of fear. It felt personal.

“We were a bit thrown off — we were the targets?” said Catherine Romero, president of Sigma Alpha Zeta. “It’s over, but now there’s a Facebook fan page for this guy, so maybe there are other people who think like him.”

Romero said she has counseled her sorority sisters to refrain from wearing clothing with the sorority’s Greek letters and to generally keep a lower profile. She and many other sorority women were called home for the weekend by anxious parents. She admitted that she felt safer at home, but resisted telling members of her chapter to constantly look over their shoulder.

“I’ve said to them, ‘You cannot stop living your life because of someone’s actions,’” Romero said.

After the shootings outside the sorority house, police said, Rodger drove away in his BMW and gunned down Christopher Michaels-Martinez, 20, another UC Santa Barbara student, at a nearby deli.

A representative for Santa Barbara Cottage Hospital said five of the injured shooting victims remained hospitalized Monday, four in good condition and one in fair condition. UC Santa Barbara canceled Tuesday classes but said faculty and staff will be on campus to offer support and counseling.