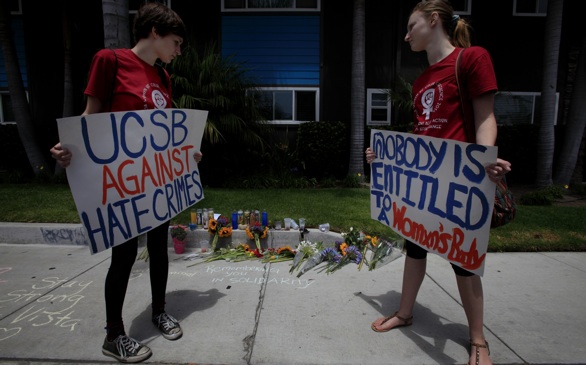 SANTA BARBARA -- UC Santa Barbara has canceled Tuesday classes and is preparing for an afternoon memorial service in the aftermath of a Friday night killing spree near campus that left six of its students dead.

"This is a time for mourning and grieving, and for consoling and supporting each other," UC President Janet Napolitano wrote in a letter to the university community. "It will take time for our UCSB colleagues to recover and heal from this."

The memorial service begins at 4 p.m. Tuesday in Harder Stadium.

After fatally stabbing his roommates and later shooting others as he drove through Isla Vista, where many UC Santa Barbara students live, mass-murder suspect Elliot Rodger shot himself, police say.

The 22-year-old Santa Barbara City College Student shot or intentionally rammed with his car more than a dozen others in the Friday night attack, according to police; Napolitano said nine of the wounded were UC students.

Among the dead are three UC Santa Barbara students from the Bay Area: Cheng Yuan "James" Hong, 20, and George Chen, 19, both from San Jose, and Weihan "David" Wang, 20, of Fremont. Hong and Chen were listed on the lease as Rodger's roommates. All three were killed in the apartment.

According to their Facebook pages, Hong was a 2012 graduate of Lynbrook High School. Chen graduated the same year from Leland High. Wang was briefly a student at American High School in Fremont before he transferred to a private school, according to James Morris, superintendent of the Fremont Unified School District.

UC will lower all of its flags to half-staff through June 1, Napolitano said.

"During this terrible time for our UC community, I ask that you join me in the belief that the process of healing and reflection we will go through in the coming days will draw us closer as a university community," she wrote. "Together, we will get through this."