Your 2014 Vans Warped Tour Guide: It's not your average music fest! 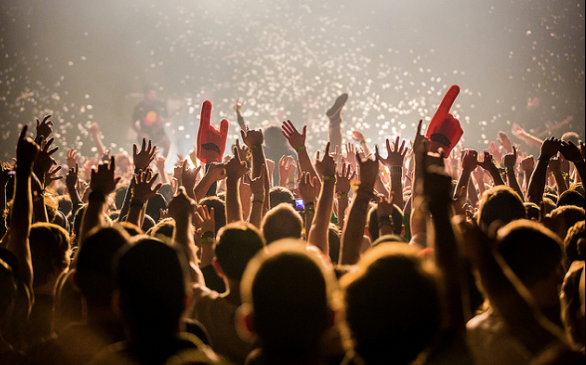 THE TOUR
It has been 20 years since the first Vans Warped Tour, and 2014 marks the big two-decade anniversary.

For those of you who don’t know what Warped Tour is, it’s a hard-hitting music festival that travels across the United States. When Warped Tour first started, its sound was generally alternative rock, but a shift of eclectic sounds has been adopted in the recent years. Genres to expect at this year’s tour span from hardcore rock and pop to indie and hip-hop.

As Kevin Lyman, the creator of Warped Tour and board member of Music Cares, said, “Warped Tour is one of the most eclectic traveling music festivals in the country today!”

Some famous bands that we know and love today got their start playing at Warped Tour. The forever-loved pop-punk band, Blink-182, All American Rejects, New Found Glory, My Chemical Romance, 3OH!3 and Paramore, to name a few, would probably not be where they are today if they didn’t go on this exciting tour. Every band has to start somewhere, and Warped Tour has given many bands the opportunity to grow in the music world and gain new fans.

If interested in attending, the closest show to Los Angeles is in Pomona on June 20. If you can’t attend that date, there are four other dates on the tour that will be in California.

Tickets are about $40 and can be purchased through websites such as Ticketmaster.com or at a retail location, like Wal-Mart, or some local malls. If none of those options work for you, you can always buy them at the box office the day of the show.

Organizations, including like Music Cares and Feed Our Children Now, will also be a part of the Warped Tour experience. If you donate three cans of food, you get to skip the line to get into festival faster.

On June 13, a live webcast during one of the tour dates will take place. If you happen to not be able to go to Warped Tour at all, enjoy this online experience, and hopefully the following year you will be able to attend.

BANDS TO WATCH
The Summer Set
This band’s latest album, Legendary, put it on the map for success. With a pop-rock sound, the Summer Set has an edge in its music, but they're still able to get you up to dance without a care. Through its lyrics, the band makes you feel important, not just to them, but also to the rest of the world.

We The Kings
All the way from Florida, this alternative rock band recently came out with its fourth album called Somewhere Somehow. Lead singer Travis Clark, known for his red ginger hair, brings love and energy to his music and on stage.

Breathe Carolina
Coming out with its fourth album on April 15 called Savages, this electronic-pop band gives you a reason to bust all those crazy dance moves you’ve been hiding from your friends. Hit song “Blackout” is a great “beginner” tune that will help you decide if this band is for you.

Yellowcard
Everyone knows the classic “Oceanavenue,” but what you didn’t know is that they will definitely be on Warped Tour this year for the sixth time. It will be Yellowcards’ third time performing throughout the entire festival!

We Are the In Crowd
This New York band has come a long way from its EP days with the album, Weird Kids, which has become relatable to the today's youth. If you’re into pop/punk and rock sounds, then check out We Are the In Crowd’s latest album, and see the band perform live!

This Wild Life
This under-the-radar local band from Long Beach, Calif. delivers some amazing acoustic pop tunes. To any fan girl wanting to be comforted by acoustic sounds, this is the band you don’t want to miss. Listen to its single “Ripped Away” to get a feel of what This Wild Life is all about.

WHAT TO BRING
Since Warped Tour is taking place during the summer, it can get scorching hot. I advise you to do the following:

1. Bring a pair of sunglasses.

2. Bring a water bottle to drink water, not alcohol.

3. Wear sunscreen beforehand (you don’t want to get a sunburn).

4. Buy a map/set list of the bands playing the day of the festival to give you an idea of how to divide your time.

5. And carry a small bag for purchased merchandise, your cell phone and/or a camera.

I would also avoid wearing jeans and any dark colors, because you'll sweat a lot more. Also, don’t wear any open-toed shoes.

I have attended Warped Tour in previous years; trust me when I say it’s an unforgettable experience you’ll want to be apart of!