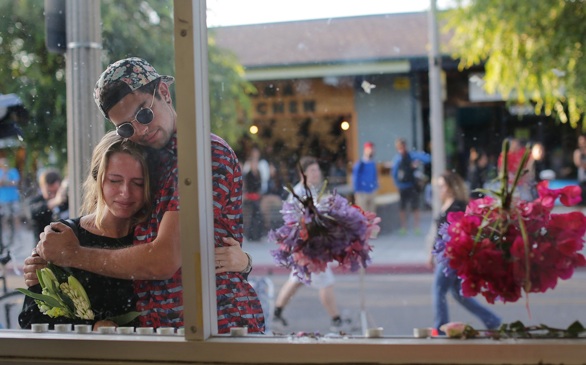 Spurred by the Isla Vista killings of six college students, two California lawmakers are proposing a bill that would allow concerned family members and close friends to initiate a "gun violence restraining order" if someone has shown a propensity to commit violence.

The bill would grant law enforcement the ability to investigate threats and ask a judge to grant an order prohibiting firearms purchase or possession. If a judge deems that someone is indeed a threat to themselves or others after a family member, spouse or close friend has come forward, the weapons that person might have in their possession would be removed. They also would be forbidden from buying new firearms for a year, according to Assemblyman Das Williams, D-Santa Barbara, who plans to formally introduce the bill with Nancy Skinner, D-Berkeley, on Wednesday.

The restraining order could be renewed, he said.

"I think that the tragedy that we experienced in my hometown of Isla Vista makes me realize that there is a role for family members to identify a threat when someone is suicidal or potentially homicidal where they might commit violence to themselves or others, but they don't yet have a way to make law enforcement or the judicial system take any kind of action," Williams said.

"It's a very simple goal," Williams said. "People who are either temporarily or permanently mentally unstable should not have possession of firearms, and I wonder how many mass killings have to occur before we have to do something about that in society?"

Elliot Rodger, 22, formerly of Woodland Hills, stabbed three UC Santa Barbara students to death in his apartment and fatally shot three others Friday night near the university campus. He later died of what officials believe was a self-inflicted gunshot wound.

In April, Rodger's mother had tried to intervene in what she considered a potentially dangerous situation. She called one of her son's counselors after seeing bizarre videos he had posted on YouTube though not the one that detailed his ultimate plan of attack. The counselor called a mental health service, which then called authorities. They concluded that Rodger posed no risk.

"My wife went to school at UCSB and the thought of another tragic shooting there is just sickening," said Schiff, D-Burbank. "You have to ask yourself how many more of these horrible tragedies are we going to endure before we're going to do something? The common denominator is too-easy access to firearms by people who are seriously mentally ill."

Parents of the young victims and their friends have also spoken out in recent days.

The father of victim Christopher Michaels-Martinez, who was shot by the suspect in a deli, delivered an emotional message to television cameras in front of the Santa Barbara County sheriff's station over the weekend.

"Chris was a really great kid; ask anyone who knew him. His death has left our family lost and broken," Richard Martinez said. "Why did Chris die? Chris died because of craven, irresponsible politicians and the NRA. They talk about gun rights. What about Chris' right to live? When will this insanity stop?"

A representative from the California Rifle and Pistol Association did not return calls Tuesday.

"It's just very heartbreaking for your daughter, who is in high school, to find out that her friend has been shot dead," Spater said at a memorial held at Westlake High School on Monday night. "It's something a mother, any parent doesn't want to happen. All I can say is I support the other parents that urge for gun control. We need more gun control."

Schiff said several things could be done to help prevent similar tragedies. Passing a bill that would expand background checks for gun sales would keep people currently prohibited from getting a weapon because they are mentally ill from actually getting one, he said. Secondly, states need to be more forthcoming with mental health data so those who are barred are entered into the federal background check system. Many states have provided only a small fraction of the records that they are required to provide by law. Lastly, Schiff argued that the standard of when someone is considered so mentally ill that they cannot get a firearm needs to be re-examined.

That bar is currently set too high, he said, and too many people who are very sick are qualifying to get a firearm even though they are "a grave threat" to themselves and others, he said.

"You have to threaten someone else or be voluntarily committed to be deprived of getting a weapon, and that standard is just not protecting us," Schiff said.

Meanwhile, three people who were injured in the Friday night rampage remained hospitalized at Santa Barbara Cottage Hospital as of Tuesday. Two were in good condition and one was in fair condition, hospital spokeswoman Maria Zate said.