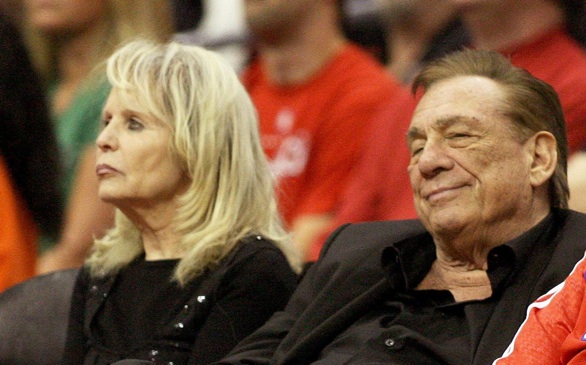 Donald Sterling told the NBA on Tuesday that he should remain owner of the Clippers, arguing that the league is trying to oust him based on an illegally recorded private conversation.

In a 32-page letter responding to the NBA’s charges, Sterling characterized audio of his racist comments leaked last month as a “private lovers’ quarrel” — one that cannot serve as the basis for the league to terminate his ownership because it violates his California constitutional rights. Sterling also stated in a cover letter that he has “received offers in excess of $2.5 billion” to purchase the team, which would set a new record in U.S. pro sports.

Already banned from the NBA for life, Sterling contested each of the league’s charges in the letter, denying that he has violated its constitution. He accused the NBA of in turn denying him his rights, and questioned the legality of using the audio of a conversation between himself and female companion V. Stiviano. It is illegal to record someone without permission in California, and Sterling has denied Stiviano’s contention that he knew about the recording.

“The authors of the charge did not have the courage, decency, or honesty to acknowledge the circumstances surrounding Mr. Sterling’s jealous rant or even that the source of their information was borne from the ‘fruit of the poisonous tree,’” the letter read.

Sterling also called his punishment “draconian,” saying that his lifetime ban, $2.5 million fine and potential termination are unprecedented given the allegations. He defends himself by providing a litany of offenses from other players and owners, including Kobe Bryant’s on-court use of a gay slur in 2011. Bryant was fined $100,000.

The 33-percent capital gains tax he would have to pay in a forced sale, Sterling wrote, would also constitute an “egregious forfeiture.” Passing down the franchise through inheritance would greatly reduce the tax.

In addition, Sterling states that the June 3 hearing to determine his fate will not be fair or impartial, given that many franchise owners have already publicly sided with the league. He argues that he has been prevented from mounting his own investigation because he has been locked out of his Staples Center office, where documents are located, and barred from being involved with the Clippers organization.

NBA spokesperson Mike Bass said the league has received statements from both Donald and Shelly Sterling, and plans to proceed with its June 3 hearing in New York City. A three-fourths majority vote by the NBA Board of Governors would terminate the their ownership of the Clippers, transferring control to commissioner Adam Silver. Silver said last Tuesday that he would prefer Sterling sell the team voluntarily on a “reasonable timetable.”

Donald Sterling has also empowered his wife Shelly with control of the franchise in order to negotiate a sale in time to beat that de facto deadline. However, the NBA — which only recognizes Donald as the team’s lone controlling owner — is only amenable to an agreement in which she sells 100 percent of the team. The Sterlings share ownership of the Clippers in a family trust.

The team is widely expected to fetch more than $1 billion, though bids could soar even higher.

The Dodgers sold for a record $2.15 billion in March 2012, though the Los Angeles baseball team has a far more storied history than the Clippers. That purchase nearly doubled the previous top price tag for a U.S. sports franchise: the Miami Dolphins selling for $1.1 billion in 2009.

According to ESPN and TMZ, potential bidders for the Clippers include: Steve Ballmer, a former Microsoft CEO who met with Shelly Sterling this past weekend; Magic Johnson and the Guggenheim Partners, responsible for the Dodgers purchase two years ago; a group led by former NBA All-Star Grant Hill, who retired as a Clipper last year; Patrick Soon-Shiong, the wealthiest person in Los Angeles and a minority Lakers owner; a group helmed by David Geffen, Larry Ellison and Oprah Winfrey; and television host Larry King.