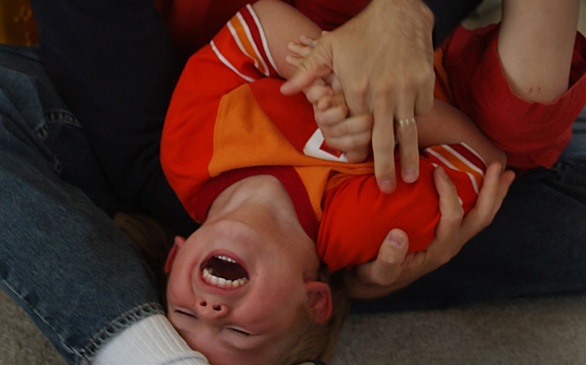 The 'Tickler' is nothing like this dad tickling his 4-year-old son.
(Credit: LAYNE BAILEY/CHARLOTTE OBSERVER/MCT)

Yes, you read the headline correctly. A serial tickler has been targeting students at Boston College in Chestnut Hill, Mass., reports Boston.com.

Over the last two years, there have reportedly been 10 sightings of the "Tickler," who has been sneaking into residences, watching students sleep and tickling their feet.

However, there seems to be conflicting reports. On Wednesday, the Boston Police Department reportedly said there was only one incident where a foot was touched, but a sergeant supposedly said there have been multiple incidents and that the "Tickler" was not a myth.

Regardless, this "Tickler" situation is beyond creepy! One male student told Boston.com he saw the "Tickler" in his room at 3:45 a.m.

"Someone was standing at the end of the bed, and by the time I realized there was someone really there, he was booking it right out my door," he said.

The "Tickler" is described as a 5-foot-8 black male wearing dark clothes and a hoodie.