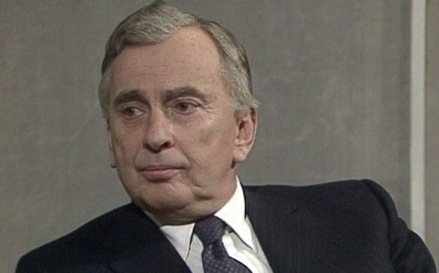 “You’re either a writer or you’re not.”

To Mr. Gore Vidal, it was quite simple. The craft of a wordsmith is not something as trivial as a hobby or even a profession. To Vidal, it was an extension of the human soul onto paper. Suppressing the itching words within will cause your own descent into insanity.

But to Mr. Gore Vidal, it was the sanity of the U.S. that he was really seeking to save. Whether or not his country’s people would let him save them is a whole other matter.

In Nicholas Wrathall’s latest documentary Gore Vidal: The United States of Amnesia, the gladiator of American liberalism, Gore Vidal himself, takes us by the hand and leads us through the political landscape’s increasingly precarious nature during the last century. Traipsing through the bogs of war, celebrity and scandal, Wrathall asks whether there will ever be someone who will so audaciously defend what others won't.

Vidal asked this same question throughout his entire life. It seems that throughout his career as a political and historical writer, he was unmatched in his fervent passion for justice in our society that seems to be falling under the corporations’ tyrannical powers.

Much of Wrathall’s documentary seeks to explain not just what Vidal was fighting for, but why so many of his words fell on deaf ears.

To explore that tragedy of sorts, the director delves into Vidal’s personal life where he surrounded himself with the world’s highest intellectuals, celebrities and politicians. Traveling companions with Tennessee Williams, writing partners with Paul Newman and weekend buddies with John F. Kennedy, Vidal saturated his company only with those that could give more depth to his own intellect.

But with these high societal names comes controversy, as Wrathall inserts a layer of mystery and intrigue when it comes to Vidal’s sexuality. As the writer of one of the first novels with an explicitly homosexual sex scene, The City and the Pillar (1948), Vidal was instantly targeted by the conservative party as a subversive entity of the liberal agenda. Since then, he always had to take hits concerning his own sexuality.

Wrathall, clearly a close friend of Vidal himself, handles the controversies of Vidal’s life with care, which is a slight downfall for the doc.

Wholly biased towards liberalism and Vidal’s sensibilities, the director doesn’t show us enough of the other side, the counterattack to Vidal’s incessant questioning. Even though we get a glimpse of his infamously heated debates with conservative William F. Buckley in the 1960s, Wrathall really only includes one-on-one interviews with those Vidal was closest to. Perhaps it would have been better to see those who he was up against.

Or, perhaps it was the country’s politics—not its individual—that was taking Vidal down all along. Closed off and stubborn to change, America at large seemed to be Vidal’s only formidable opponent—his thorn and rose. He loved it so dearly that he would do everything in his power to keep it from squandering.

From his Hollywood screenplays (Ben-Hur, Billy the Kid) to his countless novels about the historical happenings of Washington D.C., Vidal’s writings have captured that American gumption he so fervently fought for.

So, we ask ourselves the question again: After Vidal’s death in 2012 at the age of 86, who will take his place? Will there ever be someone as fearless and as truly in love with America to take the reigns of new age liberalism?

Vidal hoped so, and we do too.

Gore Vidal: The United States of Amnesia releases in L.A. at the Nuart Theatre on Friday, June 6, 2014.