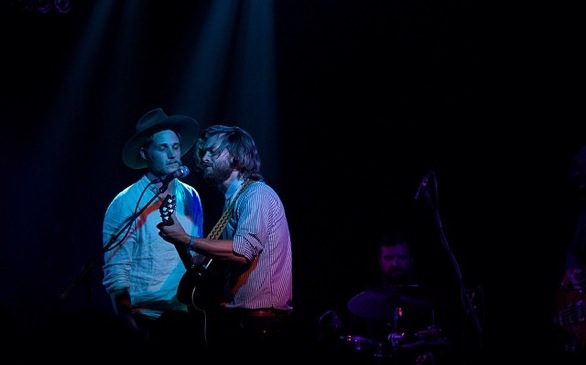 The Troubadour is slowly becoming my second home, my happy place of sorts. On Thursday night, Jamestown Revival couldn’t have made me feel more at peace.

Zach Chance and Jonathan Clay's music rolls off the stage and into your heart as smooth as a calming new spring day. A sold-out Troubadour could not have been a more fitting venue for the duo to lay down its lyrical prowess upon Los Angeles.

The two opened the night with “Fur Coat Blues” (Utah), a song inspired by an old man playing blues in a fur coat on the side of the street in L.A. When I spoke with the duo earlier in May, we talked about how their tunes make people think and reflect, something we agreed today's popular EDM genre is lacking. “Fur Coat Blues” certainly set the tone for a show that would make you think, laugh and cry—Jimmy V’s three ingredients to a good day.

As I surfed through the crowd, the vibes among the eclectic, dashingly attractive audience were simply unreal. Although it was too packed for anybody to wildly dance, fans sill grooved and jammed with the band like it was nobody's business.

Jamestown Revival's Americano style is certainly something the world has been missing, and the guys' personalities on stage are a hidden gem as well. As the two moved from song to song, they graced the crowd with hilarious road stories and even a few witty remarks. For example, one fan called out, “Play some Skynyrd,” to which Chance responded, “Real f*cking funny!”

The duo ended its show before the encore with “California (Cast Iron Soul),” another fitting tune.

The night was perfect, but it became even more amazing when I stumbled into Chance and Clay outside the venue. Only then did I really begin to understand what floating on cloud nine really felt like.

It's safe to say that maybe the night was “too much paradise,” but I certainly left with a “cast iron soul,” taking the wonderful experience that was Jamestown Revival and making myself a better man.