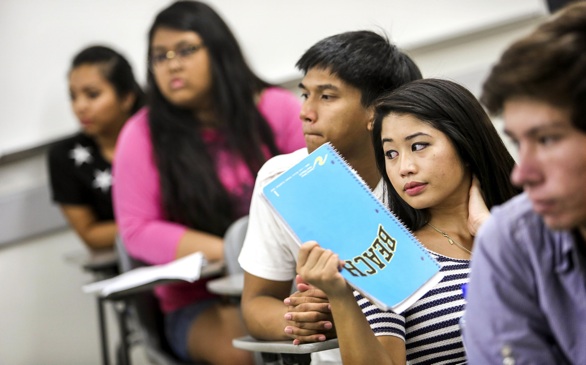 California State University is embarking on a hiring spree, aiming to add 700 new full-time faculty members next year in an attempt to reverse years of class and staff reductions and improve student success.

The push comes as the university is under pressure to move undergraduates more quickly through the system and reduce its reliance on temporary instructors, whose ranks have increased at colleges across the nation in a response to budget constraints.

Cal State also is facing record demand — with the number of undergraduate applications for this fall at its 23 campuses topping 760,000, the highest ever.

The number of full-time, tenured faculty members or those on a tenure track declined from about 10,700 in 2008 to about 9,800 in 2013, according to the university. Hiring of temporary lecturers rose during that period.

Educators and others are watching to see if Cal State's actions may foreshadow a nationwide uptick in faculty hiring. The number of jobs in higher education decreased slightly in the first quarter of 2014, according to a report from HigherEdJobs, an employment website that analyzes U.S. Department of Labor statistics. But job postings for both part- and full-time positions increased, which may indicate that colleges expect higher enrollment for the fall, the report said.

"It's great that Cal State is increasing hiring of tenure track faculty and will be welcome news for the industry," said John Ikenberry, HigherEdJobs president and co-founder.

Hiring at California's 112 community colleges also is rebounding, officials said. In the 10-campus UC system, the ranks of tenure-track faculty fell nearly 3% between 2008 and 2013. But in the absence of additional state funding, hiring is expected to remain flat, said spokesman Peter King.

The 700 new Cal State hires (not all positions have been filled yet) is a considerable improvement from the grim years of the recession, including 2010 when only 108 permanent faculty members were added. There were 470 appointments systemwide in 2013.

Other campuses are steering a greater portion of student tuition revenue to hiring and spending less on building repairs and other needs.

Gov. Jerry Brown's 2014-15 budget proposes an additional $142.2 million each for both Cal State and UC. Cal State Chancellor Timothy White is lobbying to get $95 million more for the university to enroll an additional 20,000 students in the fall. The extra funds would also be used to hire even more faculty to provide additional classes.

But she cautioned that the system is still far from its long-standing goal to have 75% full-time faculty.

Lecturers provide an essential teaching role, educators said, but they frequently have other part-time jobs and typically are on the hunt for permanent posts themselves. It is full-time faculty who — besides teaching — are primarily responsible for advising students, developing curriculum and programs, conducting research and serving on committees.

Many professors are let go or leave before gaining tenure; the process takes six years, and about a third of professors are dismissed or leave for before reaching that status, she said. In addition, a large number of professors across the system are nearing retirement. In fact, with staff departures, the net hiring gain next year may be only about 250.

"While 700 sounds like a lot, we are on track to not meet the goals of building a strong faculty to meet the needs of students," Guerin said.

On campuses, however, officials are pleased that the nation's largest university system is addressing these issues.

"We're excited about the hiring we're doing," said Cal State Dominguez Hills President Willie Hagan. "We'd be more excited if we could have additional funding, but the fact we're able to plan and address this problem in a more focused way is heartening."

The Carson campus is bringing in about 25 new faculty members in the fall and planning searches for roughly 32 more the next year. Priorities include the College of Business, which lost nine positions in recent years and replaced four; so-called bottleneck courses such as English and math that students need to complete degrees; and new programs such as cyber security and digital media in which there are increasing job growth, Hagan said.

Cal State Long Beach is hiring about 60 new professors, including three in accounting and three in nursing, programs where faculty are in high demand and can be hard to recruit, said Interim Provost David Dowell.

"In both cases, lots of people with those qualifications can make a lot more money in the private sector, so cutting a deal attractive enough is hard," Dowell said.

Salaries for new professors will start at between $68,000 and $110,000, depending on their department and qualifications.

Rashida Crutchfield, who was a lecturer in social work for two years at the Long Beach campus, was hired as an assistant professor for the fall. She earned her doctorate in Cal State Long Beach's College of Education.

"A lot of lecturers and adjuncts end up moving from place to place even if they're dedicated to the students," Crutchfield said. "Putting down roots means I can put even more concentrated effort inside and outside the classroom, spend more time in the office for academic support and provide social support and guidance. Those connections make students want to stay and be engaged in their classes."

Cal Poly San Luis Obispo hired about 70 permanent faculty members in the last three years and will add about 30 new people next year, largely because of funds generated from a student success fee adopted in 2012, said Provost Kathleen Enz Finken. The success fees are controversial on many campuses but were supported by a student referendum and will generate about $15 million next year, much of it for new faculty, Finken said.

About 17 new tenure-track professors will start at the Cal Poly College of Science and Mathematics in the fall, said Dean Phil Bailey.

With a high cost of living in the coastal community and relatively stagnant salaries, luring experienced, qualified people can be a challenge, Bailey said.

Still, the university didn't do poorly: The newcomers (who will make between $65,000 and $70,000 to start) include a microbiologist with a PhD and a medical degree from Cornell, a postdoctoral biochemist from Stanford and Derik Frantz, who earned a PhD from the University of Zurich and currently is a postdoctoral scholar at MIT.

Frantz said he applied for about 15 positions and received another offer before accepting the job at Cal Poly.

The chance to combine undergraduate instruction and research is "pretty much my dream job," said Frantz, 31, who will teach a basic organic chemistry class. "The opportunity to offer undergraduate students that real-life problem solving is going to benefit them greatly. Cal Poly is a big place with a really great state of the art orientation, a large chemistry department with a lot of experts in different fields."

And, he added: "It doesn't hurt that it's a beautiful place to live."