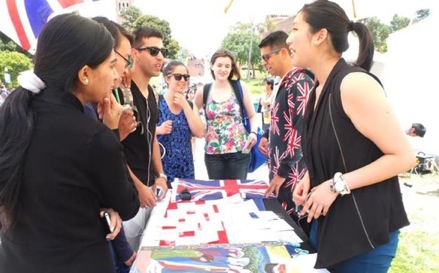 The World In-Sight (WIS) expo (a mini international exposition that was held at UCLA on Wednesday, May 21) was a huge success, attracting more than 2,000 attendants, hundreds of student representatives from 28 different countries, more than 20 student groups and countless volunteers who participated in this first-time event.

Student representatives from the U.K., Germany, France, Japan, China, Spain and 22 other countries showcased their countries’ food, activities, costumes, posters, games, instruments, music and much more. Every representative created its own booth to showcase its culture's uniqueness. Dancing, singing, drumming and other live entertainment were also performed throughout the event. Lasting for five hours, there was constant laughter, applause and chatting.

WIS director Andreas Liu—who is a fourth-year UCLA student studying physics and business economics—said, “WIS will be a milestone in cross-cultural understanding, mutual dialogue and international collaboration at UCLA.”

Introducing this program has been a yearlong dream for Liu, who was inspired after visiting an international world fair that's held in San Diego every Sunday. Combined with his personal identity as an international student and his long-term interaction with other international students, Liu decided put on a similar event that brings students from all different countries together at UCLA.

As the president of UCLA’s International Student Association (ISA), Liu formed a WIS board with We Speak English Project (WSEP). Aiming to educate the public and bring together international and domestic students, ISA and WSEP worked together for nine months to create this event.

From brainstorming the name to the actual implementation of the final plan, the board members overcame various difficulties and personal challenges.

For example, in order to ensure all fire and food safety regulations were met, they had to acquire numerous permits from university officers and the Environmental Health and Safety Office in Westwood.

According to Jaan-Eerik Past, the president of WSEP, “The biggest challenge I personally dealt with had to do with getting all of the 15 groups selling food to go through the process of getting permits. Student groups came to the health and safety office only within two days, and I ended up staying in the office for almost four hours, constantly scheduling meetings.”

Liz Yu, WIS’ material director and also ISA’s next president, said, “The idea of WIS is completely new, and we are completely student run. That’s what made it harder, because we all had to put in extra effort to plan everything out.”

Thankfully, all the hard work paid off when the WIS expo received a great turnout. Annie Wang, a third-year psychology major and international student from China, said after the event, “As an international student, I no longer feel isolated in America after getting to know so many new friends, learning so much about different cultures and eating so much delicious food.”

WIS is a program that connects and benefits everyone, and Liu hopes this expo will become a UCLA tradition. According to him, international students are proud to showcase their home countries’ culture, and domestic students are eager to learn more about them.

Liu also suggested WIS should expand beyond UCLA. “There is no reason for World In-Sight to stay only at UCLA, and every university should support and encourage such an event to happen on its campus,” he said.