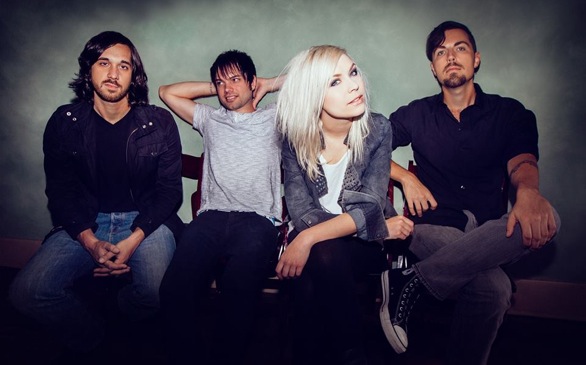 THE NEARLY DEADS: INVISIBLE TONIGHT
Arise, zombie nation—the new Nearly Deads record is about to break loose, and it’s coming for you!

Actually, the latest music from front woman Theresa “TJ” Jeane and company has little to do with the undead. To the contrary, Invisible Tonight is filled with full-of-life high-energy rock ‘n’ roll. For example, break-up song and first single “I Said” is a tune more likely to warm your heart than eat it.

That doesn’t mean the band hasn’t spent time feeling like they’re stumbling around looking for life, though.

“We’ve been through a lot of changes as a band over the past year, and at some points I found myself wanting to give up,” said Jeane. “I felt like people wanted me to be invisible and that my voice wasn’t being heard. Instead of letting it break me down, I turned the experience into something positive with the lyrics for Invisible Tonight.”

Expect more positivity when the band hits the road behind the new album later this summer. Invisible Tonight drops on June 24.

Of course, Kelly’s massive and oft-covered hit “I Believe I Can Fly” is included too.

ANNIE STELA: WHIPLASH BLUES
Have you ever crossed paths with acclaimed Los Angeles-based singer Annie Stela? If so, it’s possible that one of the songs on her new album Whiplash Blues is about you.

On her debut album Fool, Stela sang songs that were mostly about herself, but this time she turns the spotlight on others.

Don’t worry, though, if “Liar” is about you; the song is buoyant pop featuring a sing-along “liar!” chant that’s a lot of fun, so she can’t be too mad at you.

Whiplash Blues is out now, and you can see the video for standout track “Love Me Still” on YouTube.

The compilation will feature music from acts already signed to BC Music, but if you’d like to submit something for consideration, check out the details at badchristian.com.

HALF NOTES
THE WAILERS – Bob Marley’s back-up band is celebrating the 30th anniversary of the release of the Legend album (“I Shot the Sheriff,” “Get Up, Stand Up,” “No Woman No Cry”) by playing it in its entirety on their current tour. Catch them July 17 at the Saban Theatre in Beverly Hills.

GWAR – The Aggronautix Company has announced the release of the “Jaws of Death” polyresin Throbblehead set featuring the likenesses of band members Balzac and Oderus Urungus (the late Dave Brockie). A portion of the proceeds goes to the Dave Brockie Fund, a charity working to advance music and the performing arts.

PYROTEC – Pyrotec’s new EP Arrival, available now, is about a “visiting space alien heading home,” so expect the EDM/old school hip-hop work to take you on an interplanetary journey.

THE BOTH – Aimee Mann and Ted Leo are the Both. These two have a debut self-titled album out now and a show scheduled at the El Rey on June 14.

UNTIL THE RIBBON BREAKS – This U.K. experimental collective recently resettled in Los Angeles. Get to know them as they hold down a Monday night residency throughout June at the Bootleg Theatre.