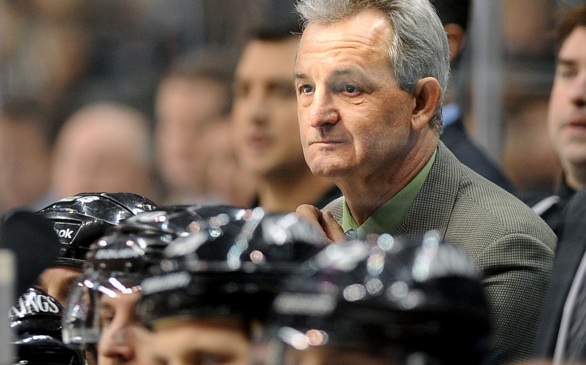 He talks kind of funny, he acts kind of grumpy and he can burn a hole in you with that steely glare if you have the audacity to ask a silly question.

He kind of looks like that crazy uncle who shows up every Thanksgiving, mumbling something about something no one quite understands, and he comes from a place so foreign to the city he works in you sometimes wonder how the heck he’s adapted to the great metropolis he calls home for nine months out of the year.

But Los Angeles sure loves it some Darryl Sutter.

And man, can this guy coach or what?

The Kings have played 10 playoff series under Sutter and won nine.

We all get how the Kings have perched themselves onto another magic carpet ride the the Stanley Cup Final, whisked away by the goaltending magic of Jonathan Quick and the tenacity of Dustin Brown and the emotion of Drew Doughty and the clutch play of Justin Williams.

But you’re making a grave mistake if you overlook the rail-thin, gray-haired, curious looking man standing behind the Kings’ bench every night.

He might act like the anti-hit of the party and he sometimes gets lost amid the greatness the Kings have ascended to over the past three seasons, but you shudder to think what the Kings would be if not for the steady hand of Sutter.

From the moment he arrived in Los Angeles to replace Terry Murray during the 2011-12 season, he’s brought a sensibility and practicality befitting his Canadian farming background.

Never too high, never too low.

And holding a firm grasp on the overall picture of things, even while grinding out the day-to-day process of a long hockey season — or is it the beginning and end of harvesting a crop or raising cattle?

When it comes to Sutter, we forget sometimes.

Because really, it’s the same thing.

The Kings faced three seven-game series on their current ride to the finals, which begin Wednesday at Staples Center against the New York Rangers.

The Kings handled them with ease, following the cue of a coach who never allowed them to deviate from the process just because things didn’t always go their way.

Sutter wouldn’t let them, understanding and conveying that final scores don’t always reflect effort and precision. So why worry about a loss?

Any good farmer will explain you can do everything perfectly to harvest your crop, from the ideal seeds to the latest technology to the fanciest equipment.

The Kings lost Games 5 and 6 to the Blackhawks to force Game 7, but Sutter never fretted for a second.

Because in his mind, his Kings played well enough to win both games, and as long as they stayed the course in Game 7 they would be in position to claim the series.

No need to freak out.

Just play the game you’ve been playing, and chances are things will work out.

It seems so easy.

He even sounds a bit funny explaining it.

And pity the reporter who asks him to go any deeper than that to convey it.

But there is genius behind the simplicity.

And profoundness in all that practicality.

The Kings are a lot of things, beginning most certainly with some of the greatest players in the game.

But you’re making as big mistake overlooking the coach behind the bench.

The Kings are lucky to have him.

And so is Los Angeles.