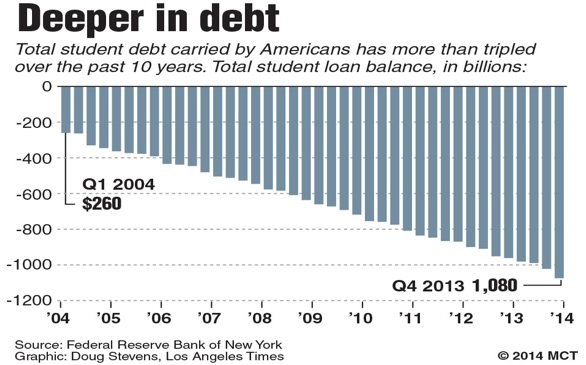 The amount of debt carried by American students has more than tripled over the past 10 years.
(Credit: Stevens/Los Angeles Times/MCT)

Student loan debt is a disease that affects a large portion of the college student body. And like their fellow non-athlete classmates, many college athletes are not immune to it, despite popular belief.

This may come as surprise to some. After all, aren't college athletes given full or partial scholarships to help pay for tuition costs and living expenses? Yes and no.

First of all, as Forbes reports, not all college athletes are rewarded scholarships. Some of them have to pay for college the same way non-student athletes are forced to pay: by taking out student loans.

Secondly, a partial or full scholarship might cover tuition costs, but that doesn't mean student athletes don't have to foot the bill for other college expenses.

"A full-ride typically covers only the costs of tuition and fees, often times the athletes will take out student loans to cover housing and other living expenses," Greg Shanfeld, who has assisted former college athletes with student debt, told Forbes. "Many student-athletes are of low socioeconomic status and have to take out large loans to pay for living expenses during college.”

Take former University of Cincinnati football player Brad Jones, for example. Even though he received a full scholarship, he had to take out $3,500 to pay his "true cost of attendance."

However, Jacksonville University fullback Robert DiMarco had a larger burden to bear: he took out $22,000 in student loans before graduating last year!