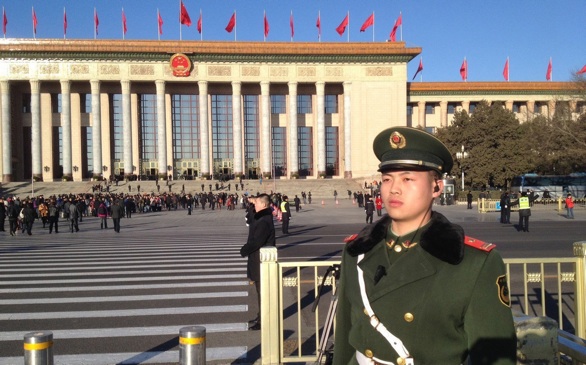 A guard stands in Tiananmen Square, outside the Great Hall of the People.
(Credit: Stuart Leavenworth/MCT)

Beijing, China - As a young reporter, it was hard not to get caught up in the euphoria of the student-led pro-democracy protests in Beijing that ended in bloodshed 25 years ago.

"Is this a revolution?" I asked a group of them in early May 1989. "Yes, why not?" came the reply in unison. Looking back, I realise my questions were as naive as their answers. But they really did believe they could bring about change by daring to stand up to the one-party system that had ruled China for 40 years.

Their demands, on reflection, seemed quite modest. They included a free press, full disclosure on how much senior government officials earned, and an end to nepotism, in which the sons and daughters of party officials received the best jobs.

No one I spoke to specifically demanded the end of communist rule as such, but just a fairer society. Of course, in the eyes of China's rulers these demands amounted to treason. Yet the leadership was deeply divided over how to respond. The nascent pro-democracy movement seemed to begin almost spontaneously after the death of pro-reform party leader Hu Yobang on April 15, 1989. He was an iconic figure to many students who mourned his death by pouring into Tiananmen Square.

And that's where they stayed until the night of June 3. I arrived in the Chinese capital two weeks later on an official visa, ostensibly to cover a visit by Mikhail Gorbachev, leader of what was still the Soviet Union. There were so many students in the square by then that embarrassed officials were forced to cancel the official welcoming ceremony. Gorbachev was ushered into the Great Hall of the People through the back door. Of course, there was a profound irony in all of this. Six months later, on Gorbachev's watch, the Berlin Wall crumbled - but the Chinese one remained very much intact.

By May 20, after weeks of paralysis, the government decided that it was finally time to act. The deeply unpopular Prime Minister Li Peng appeared on television to announce that martial law was being imposed in Beijing. It would remain in force until January 10, 1990. The hardliners seemed to have gained the upper hand. We would find out to what degree two weeks later.

Rather than intimidate the students, the decree seemed to have the reverse effect. The number of students in the square began to grow. But by now, the place risked becoming a serious health risk. Fetid piles of rubbish were beginning to pile up. You needed to seriously watch where you stepped.

Clearing the detritus left by the students was one of the main reasons given for the order to send troops into the square. On the evening of June 3, army commanders offered the students safe passage out of the square. Many took them up on the offer, by now weary of weeks of protest and poor hygiene, and fearful that their movement was heading towards a violent denouement.

By mid-evening, gunfire could be heard. The People's Liberation Army was now firing live rounds at people. No-one knows for sure how many people were killed, or whether the victims included the "Tank Man", who briefly held up a line of tanks in Tiananmen Square by standing in front of them. The image of that lone extraordinary display of defiance was broadcast around the world.

Some foreign experts put the death toll from the crackdown in the thousands. I tend to think it was probably in the hundreds. Much of the violence happened near the university district as well as in other cities, notably Chengdu and Shanghai. Chang An Avenue, Beijing's majestic central boulevard, was a battleground. I recall vividly the site of two flattened bodies, with the tanks' treadmill marks clearly visible. For a time it was hard to tell who was in control. Throughout the afternoon of June 4, thousands of reinforcements arrived in Beijing from other parts of the country. They had been told that "rebels" were occupying the centre of Beijing. Among many foreign reporters - myself included - there was a belief that China was on the brink of civil war. How wrong we were.

Twenty-five years later, I am back in the Chinese capital wondering what those who were born in 1989 think about what happened then.

Not much, is the simple answer. China's young appear to have traded demands for political reform for greater economic freedom. The government's relentless campaign to erase all public memory of what happened here has also been largely successful. Tiananmen Square remains a taboo subject for discussion, as I discovered during a visit to the campus of Beijing's University of Communication.

"It's inconvenient for me to talk about this," said one male student. "Generally I am neutral," said another. "I am not on the side of the government or the students."

Today's young are in the throes of another revolution - one of rising expectation. At a jobs fair in Beijing, I met Wang Qian, who was born a month after the bloodshed. Today her priority is a finding a white-collar job in the energy industry that pays at least $700 a month. She is aware of the events that took place 25 years ago, but is not curious to find out more, saying there is no relevance to her generation. "I know very little about this part of history," she said. "One reason is I am not very interested in politics. The second reason is this event was not mentioned in the history books I read."

Zheng Xiaotao was born three months before the 1989 protests. Today, she manages a shop specialising in skateboard clothing and accessories. She, too, is aware of what happened on June 4, 1989, but like Wang, she said it is no longer relevant. "It's the past, and the past is very far away from us. Our life is good now, so that I don't care about it at all. Twenty-five years ago, what the young people cared about was having enough food and keeping warm, whereas today we want to become stylish and show off our personalities."

Today's young people have lived through an era of rapid economic growth. They still have grievances, but know they can't change the political system.

Few countries have changed as much as China in the past 25 years. Who would have guessed back then that it would become the world's second-largest economy and stage a successful Olympic Games?

Yet, as a journalist, some things here never change. By the afternoon of June 4, 1989, Tiananmen Square was off-limits to journalists. Twenty-five years later, I attempted to record a camera statement for a news story that Al Jazeera is producing on the anniversary. I was standing at least half a kilometre from the square. Within three seconds of opening my mouth, cameraman Miguel Toren and I were detained by police who seemed to appear from nowhere.

For China's leadership, the sooner it's June 5, the better.