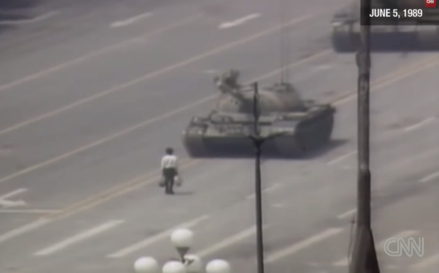 Now one of the most recognizable images in the world, Widener's Tank Man photograph shows a man stopping a column of tanks the morning after the Chinese military suppressed the Tiananmen Square protests of 1989 by force.

Then a photographer for the Associated Press, Widener, 57, is in Hong Kong this week to attend events commemorating the 25th anniversary of the crackdown. Talking to dpa in Hong Kong he explains how a student had to smuggle the picture in his underwear to save it from government seizure.

dpa: What was it like to work on the night of June 4, 1989, before the military crackdown began?

Widener: On the night of June 4, I was photographing an incident on Chang'an Avenue. There was a burning of an armoured car. The protesters had already killed a soldier. The mob scene was going crazy. People were pulling my camera. I was afraid I'd be ripped apart, and I had already been hit in the head with a rock and had a concussion. I held my passport above my head, and I said "American, American!" One of the student leaders came to me and calmed the crowd down, then told me to take photographs of the dead soldier.

dpa: Can you explain why you almost missed the Tank Man photo?

Widener: So on June 5, I had a concussion and also a bad case of the flu. I was set up on the balcony of the Beijing Hotel, and when I saw a man walk out on the street I was annoyed because I thought he would ruin my composition. I had seen the row of tanks coming but he had stopped them so I thought I was too far away to get the shot.

Before that, in the lobby they were using electric cattle prods on journalists who wouldn't give up their equipment. Kirk Martsen, a college student, helped me get up to his room and then he helped me deliver the film hidden in his underwear riding his bicycle to the US embassy, which then passed it on to the AP office to publish around the world.

dpa: Why do you call the photograph a "miracle"?

Widener: I had only taken three shots. I sat down, and thought that I blew it, that I didn't get the photo. In fact, two pictures were completely fuzzy and blurry and then there was one sharp one in the middle. I thought, how did this happen? It was as if the hand of God came down and steadied my arm. It was a miracle.