Take a Wild Ride with Rollercoasterwater: These CSUN students are ready to drop their upcoming debut album. 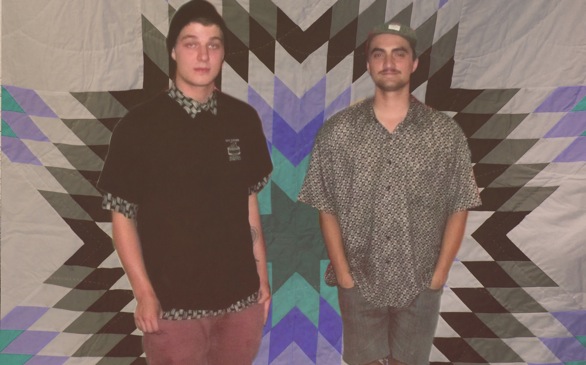 Rollercoasterwater’s Chuck Behring and Robin Levy are two of the realest people you’ll ever meet. Placing an emphasis on honesty and truth throughout their music, the boys of Rollercoasterwater have created their own organic and constantly evolving genre.

Self-proclaimed as an “electronic tribal psychedelic experimental pop music” band, the guys have an album called Dripping Retina expecting to drop on July, 1.

Recently, I sat down with Behring and Levy to discuss school, music and their new album.

What are you guys studying in school?
Behring: We’re both music industry studies majors at Cal State University Northridge. It’s a really amazing department with lots of really talented people.

Levy: It’s also really great because they have a lot of programs where you have to practice the social skills of music as opposed to just being able to play an instrument.

Behring: There’s a little bit more passion behind it, which I appreciate.

What are you guys looking to do with that professionally?
Behring: My dream is to start my own record label. I think that at some point I am going to do that.

Levy: I’d love to own a venue. I’m really passionate about live music and shows.

How do you balance school, your social lives and music?
Levy: A lot of it is overlapping; I think that’s how we balance it. We don’t do many social things that aren’t revolved around music. We go to a lot of concerts, we play shows, but outside of that…yeah, we go to a party every now and then, but not a whole lot. Not compared to music-related stuff.

Behring: It’s definitely tough to balance school and music, I think, for me. Music is so much a part of my school, so I resonate with that. But then the parts of my schooling, like the general ed that I have to go through to graduate—I definitely have to put a specific amount of effort into concentrating on it and not falling behind in that.

Can you give us a brief musical background of yourselves? Did you come from a musical family?
Behring: I started playing piano when I was 7 and was very involved in choir throughout high school. I listened to bands like the Beatles growing up, and I was just so captivated by the emotive potential of vocal harmony. I ended up going onto the Santa Clarita Master Chorale; I did that for two years. That was an amazing experience for me. It really taught me a lot about vocal musicianship.

Levy: My family had a huge influence on me with music. My dad was a touring drummer for a long time. I don’t like to say that’s why I’m a drummer, but I’m pretty sure that it is. I’ve been playing drums for a really long time, and my parents supported me completely with that.

Can you give us a brief history of the band?
Behring: It started out with just me in high school expressing myself. I have this weird obsession with creating. So, I started doing that when I was 15. I just kept recording, releasing little EPs that weren’t very long. It’s finally built up to these last two years. I’ve been working on this album that I’m about to release called Dripping Retina. It’s the first full-length album. It’s actually going to be a double LP. It’s really all I’ve been focusing on, and I’m really excited about that.

Robin joined in this year. I wrote this album not really having a good idea of how I was going to execute it live. Adding Robin was a way for me to get the experience to the audience that I was trying to communicate on this album. I think that you feel it when you listen to the album, but it wasn’t translating as well when I was onstage by myself. With him, it’s really just taken it to the next level.

Levy: It definitely gives it that human touch, even though it’s very electronic.

Could you walk us through your music-making process? What inspires your songs, and what are they about?
Behring: A lot of it is different. Some of it is a stream of consciousness; some of it is lyrics that I wrote down and worked on and perfected. A lot of my songs are about consciousness, family and kind of just a commentary on what it is to be me. It’s almost like Rollercoasterwater is a separate person who is commentating on my life, and that’s what the lyrics are.

How did you come up with the name “Rollercoasterwater?”
Behring: It’s kind of an embarrassing experience. When I was 15, I did the legal drug salvia—I want to stress that it’s legal, and I’m not encouraging anyone to do any substance whatsoever. I’d never been drunk or tried any drug before. I didn’t know going into it that salvia is one of the most intense psychedelics.

Curious, I tried it, and it hit me like a wall. My face flew out the front of my head, and it did loop-de-loops around the room like a rollercoaster. The walls were made out of rippling water. I saw all of the art I was going to make in my whole life flash before my eyes. It honestly came to me like a prophetic signal from the universe, or God, or whatever. I don’t know who sent it, but I definitely got the message.

The next day, I wrote “Rollercoasterwater” down about a hundred times in my notebook at school, and I just couldn’t stop thinking about it. I had done music up to that point, but I never thought I would pursue it. It’s embarrassing, in a way, that that’s what triggered it, but it really is.

What are your goals for the band?
Behring: I just want people to resonate with the emotions that I’m trying to evoke. I guess for long term goals…release albums, get people to hear them and play shows. And try to organize our lives around it. I’ve been doing this for so long, I just don’t know what else I would do. I feel like this is just something I’ll always do.

For more information on Rollercoasterwater, check out its Facebook page!