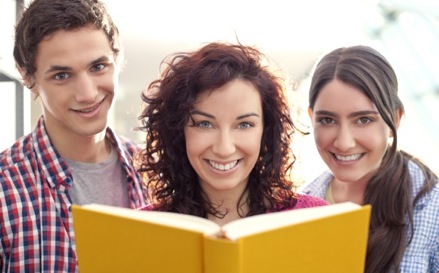 Just because school's out, that doesn't mean you can't dive into a good book!

Apocalypse
Nightmarish without being gory, Edan Lepucki’s California paints an unsettling future. In this mostly dystopian tale, the world has been devastated by extreme weather patterns, including drought, blizzards and earthquakes, and the survivors must cobble together a new kind of existence. Chilling.

Entertainment
Brimming with wisdom, Diane Keaton’s Let’s Just Say It Wasn’t Pretty doles out advice like Halloween candy. Years of anecdotes and impressions on beauty, self-esteem and self-deprecation pour out in abundance.

Travel back in time with Richard Barrios’ Dangerous Rhythm. From The Wizard of Oz to South Park, this narrative of the movie musical explains why Americans can’t get enough of them, and why they still matter.

Giant creatures reign supreme in Eiji Tsuburaya: Master of Monsters. A portrait of a visual effects mastermind, Tsuburaya worked on models for projects like Godzilla and Ultraman during the Golden Age of Japanese film.

Foodie
Amusing and compulsively readable, Dinah Fried’s Fictitious Dishes features composed photographs based on famous literary meals. One of my favorites is The Catcher and the Rye’s malted and cheese sandwich.

Fiction
With keen insight and a great ear, Miranda Beverly-Whittemore captures the infatuation and suspension of disbelief that can accompany new friendship. In Bittersweet, Mabel Dagmar finds herself drawn to her college roommate, and her intriguing family, only to discover that there are numerous skeletons in the closet.

Finally, a book to follow the tremendous Goldfinch! Justin Go’s The Steady Running of the Hour involves a will, a fortune and lost bits of history seep into the story with all the thrust and verve of Dickens. Pure delight.

Disturbing and fascinating, Evie Wyld’s All the Birds, Singing is a breathtaking original. Jake Whyte, a female sheepherder struggling to find her place in a very male field (pun intended), confronts obstacles (real, imagined and mythical) as her sheep get brutally and mysteriously picked off.

What would you do if your sibling was accused of a horrible crime? This is the premise behind Leah Hager Cohen’s No Book but the World, and it is a doozy.

The teacher you always wished you had or maybe the teacher you would like to be comes fully formed in Sara Shun-Lien Bynum’s Ms. Hempel Chronicles. Charming and delightful, this slim novel may just bewitch you.

Following on the heels of the tremendously successful The Descendants, Kaui Hart Hemmings again circles life and death in The Possibilities. Swapping out Hawaii for Colorado and a mother for a son, the author makes it fresh with her insightful characterizations.

Americana without much glossing over, Smith Henderson’s Fourth of July Creek tells the story of a survivalist, his son and the social worker who tries to intervene. Intimate, yet metaphorical, this tale touches on what freedom means on every level.

Farming
The word’s eco-est vacation can be yours for a little labor and a lot of love—just consider working on a farm. Two memoirs bring the experience to life, in all its hope and glory. Cold Antler Farm by Jenna Woginrich and Arlo Crawford’s A Farm Dies Once a Year are both full of beans. These authors don’t shirk describing the difficulty, but somehow, the reality still manages to sound idyllic.

Non-Fiction
If you can’t go on an adventure this summer, why not read one? Carl Hoffman’s Savage Harvest brings you cannibals, a missing heir and New Guinea, all in one thrilling package.

If you’re hungering for something substantial, go big or stay home with Isabel Wilkerson’s The Warmth of Other Suns. This Pulitzer Prize-winning bestseller explores the African-American exodus from south to north in the 20th century.

Graphic Novel
A prolific cartoonist with roots in the New Yorker, Roz Chast will make you laugh, chuckle and chortle in her illustrated memoir, Can’t We Talk About Something More Pleasant? The author’s ability to blend humor and substance puts her in the midst of a very rarified group of graphic novelists.

Mystery
A nice blend of Veronica Mars, Nancy Drew and Heathers, Beth Fantaskey’s Buzz Kill mixes murder, high school and dry wit. When Honeywell High’s football coach turns up dead, Millie Ostermeyer takes it upon her teenage self to track down the killer.

Spine-tingling from start to finish, Laura Lippman’s story of two little girls with nowhere to go but down, nails you to your chair. Every Secret Thing follows tragedy with tragedy, and the secrets that unfold prove indelible.

Could Sarah Lotz be the female Stephen King? In The Three, the author matches one of our best-selling authors for suspense, premise and chill factor.

Vacation Reading
Robyn Davidson’s memoir Tracks, about trekking across the Australian Outback in her early twenties, proves the author can go toe to toe with the best of ‘em. The movie, starring Mia Wasikowska, is out later this year.

A “one-way ticket to pleasure,” Peter Mayle’s The Corsican Caper takes you on a lavish vacation. The island location sets the sunny backdrop for some unsavory characters up to no good, and the shimmering sea will make you want to visit in spite of the potential for murder.

Mallorca sounds nice enough. What could go wrong on a Spanish island, in the middle of the Mediterranean? In Emma Straub’s The Vacationers, the biggest mistake is bringing along the family. Next time, go with friends.