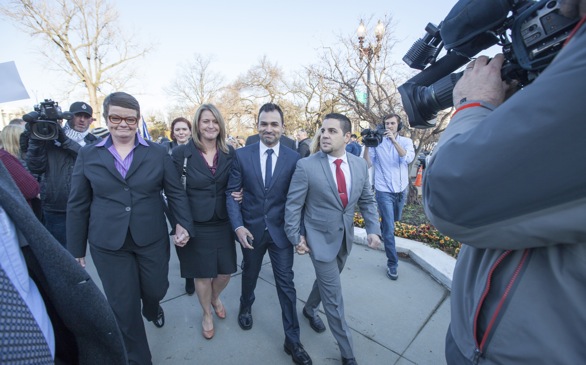 “Our stories are their stories.” – Jeff Zarrillo

In 2008, Americans took a step forward by electing its first African-American president. But in California, its citizens took a step back by voting in Proposition 8, banning same-sex marriages.

The Case Against 8 documentary delivers not only a story of love and equality, but a story about how even a known liberal state could take away a portion of its population's basic civil rights.

Directors Ben Cotner and Ryan White follow the "Case Against 8" trial and its plaintiffs—Kris Perry, Sandy Stier, Paul Katami and Jeff Zarrillo—as they become the figureheads of one of the largest civil rights issues of our generation. This film takes a look behind the scenes in order to educate not only the individuals' stories, but also to understand the judicial process.

The “Case Against 8” was a high-profile trial that was not without its own controversy. The decision to bring in David Boies and Ted Olson—the same lawyers who argued on opposing sides during the 2000 Gore vs. Bush elections—as its lead council was not without its complaints.

Some called Olson, a known conservative lawyer, a traitor. And others others feared he was only working the case to sabotage it. The Case Against 8 plays an important role in unearthing the true motivations behind Olson’s decisions, and White understood the necessity to document the trial’s entire process.

“It became more of a film about pulling the curtain back on the process versus just what happened in the final performance,” he said.

During the string of court cases, the public widely discussed same-sex marriage. This then led to an initial decision to televise the trial, but at the last minute, that decision was retracted. Since the court plays a large role in the documentary’s narrative, Cotner and White almost hit a wall.

Thankfully, due to their direct access to the plaintiffs and lawyers, they took an unexpected approach to recreate the trial: they had every person read their individual statement from the official transcripts. This yielded a unique insight into the judicial process, and demonstrated the power an individualized, heartfelt testimony could have.

Although many viewers will enter the film already knowing the case’s final outcome, this does not negate the film’s overall importance. This documentary has become a tool for educational purposes surrounding Proposition 8, the value of legalizing same-sex marriage and basic LGBT rights.

Unlike the ‘Yes on 8’ campaign that survived off propaganda, Cotner and White have created a neutral film that advocates more about educating the population on civil rights, rather than trying to persuade the audience one way or another. But regardless of its stance, or lack thereof, it cannot help but pull on your heartstrings by revealing the struggles that two normal couples go through in order to be treated as equal members of the society.

Above all, the film brings “the real harms and purposes to the courtroom versus having it all be from experts,” said Perry. Returning the power and the voice back to the people, The Case Against 8 represents and directly effects, especially since “our story was the story of thousands and thousands of LGBT people, not just in California, but across the world,” said Zarrillo.

Those involved understood that their purpose for shooting the film went beyond presenting a documentary about same-sex marriage—it was about the effect it could have on opening minds. Cotner explained he hopes the documentary “will open [the public’s] hearts and minds, and hopefully it will influence some of the upcoming legal cases.”

Katami recognized the film as the “history of a movement in California that could resonate across the country.”

While Cotner and White are touring with their film, Katami and Zarrillo are now partnered with campuspride.org and will be touring colleges to speak about civil rights for the LGBT community. Stier and Perry have spoken to a number of educational institutions, and Perry now advocates early childhood education on the federal level.

Although they may all embark on different journeys regarding the issue, all participants can agree with Katami’s statement: “Power is because you have your voice.”