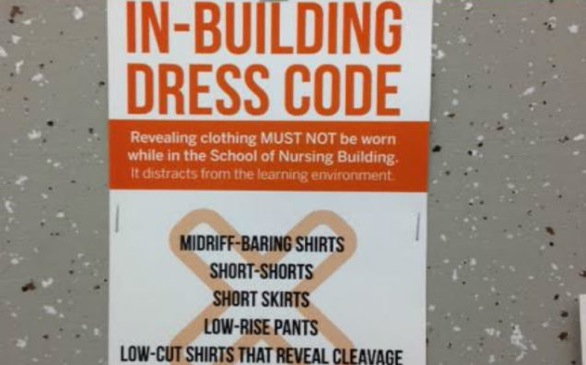 Short skirts, short-shorts, low-rise pants, midriff-baring shirts and low-cut shirts revealing cleavage were rules that were placed on a sign in the hallways at the University of Texas Austin’s School of Nursing Tuesday evening, causing controversy and outrage.

However, University Communications Director, J.B. Bird told the Huffington Post the signs were taken down by mid-to-late morning on Wednesday.

The sign read, “Revealing clothing MUST NOT be worn in the School of Nursing Building. It distracts from the learning environment.” Jezebel first posted it online, where it went viral.

Gayle Timmerman, Associate Dean for Academic Affairs issued a statement Wednesday afternoon saying, “The wording of the signs made it sound as though we were worried about women’s clothing as a distraction in the learning environment. This is not the case. We’re not in the business of measuring skirt lengths. We are in the business of educating a new generation of nurses.”

According to the Huffington Post, “It was something put up by a part-time employee who, Bird theorized, had good intentions but ultimately struck a nerve. The sign wasn’t even allowed to stay up for a full 24 hours."