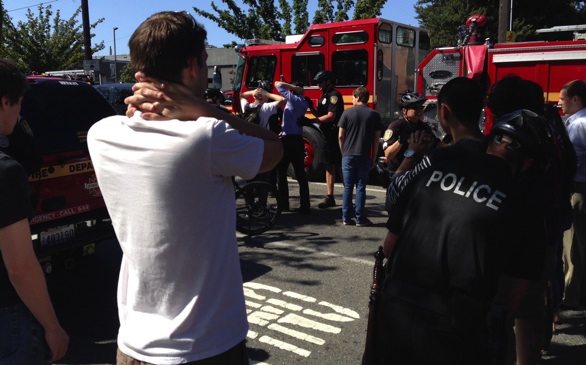 SEATTLE — He’s described as quiet, gentle, outdoorsy; a young man of deep Christian faith and dedicated student on the cusp of a promising life beyond college.

Shortly after a gunman stalked SPU’s Otto Miller Hall on Thursday afternoon, fatally shooting one student and wounding two others, Meis made a split-second decision that some now say helped stop further carnage.

As the gunman stopped to reload his weapon in blood-splattered Miller Hall, Meis, 22, a senior engineering student from Renton, Wash., saw an opportunity, his roommate said Thursday night.

Meis, who was working at the time as a monitor who sits at a desk in the lobby, near the Hall’s front door, quickly moved in to pepper-spray the gunman, then he tackled him to the ground. Police arriving moments later moved in to handcuff and arrest the suspect, other witnesses said.

Shortly after the shooting, Meis recounted the events to Ryan Salgado, Meis’ roommate for the past four years. Salgado was also in the building during the shooting and afterward went to check on his friend. Salgado later recounted Meis’ story to The Seattle Times.

Meis typically carries pepper spray with him because he likes to be prepared wherever he goes, Salgado said. Salgado said his friend seemed to be in shock. He said Meis was not injured, but he went to the hospital to be checked.

Neither Meis nor his family members were commenting about his actions Thursday.

“We’re not really talking to anyone right now,” his sister told a reporter.

But by late Thursday afternoon, accounts of Meis’ actions were snowballing across social media. “I’m proud of the selfless actions that my roommate, Jon Meis, showed today taking down the shooter,” SPU student Matt Garcia tweeted later. “He is a hero.”

Salgado and others described Meis on Thursday as quiet and athletic, a runner who values his privacy.

Meis is an excellent student who has been very involved in student government, added family friend Andrew Engstrom, who called Meis “physically and spiritually strong.”

“He’s kind of under the radar, a serious student but he’s always nice to everyone,” classmate Rebekah Ogimachi added. “It doesn’t surprise me that he would step in to do something like that. He’s a selfless guy.”

Melissa Engstrom, Andrew’s wife, said that Meis, the son of a Boeing engineer, comes from a family of deep faith that is very close knit. If anything foreshadowed his heroic actions, she added, it would be his faith in Jesus Christ and his example of being willing to sacrifice his own life for others.

“He is very quiet, very devoted to his family,” Melissa Engstrom said. “He had a lot to lose. He is getting married this summer.”