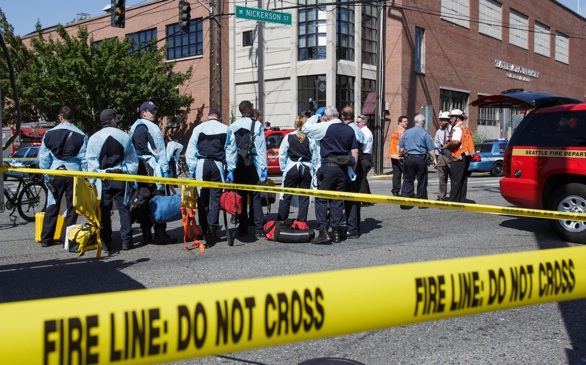 The scene near a shooting on the Seattle Pacific University campus.
(Credit: Dean Rutz/Seattle Times/MCT)

SEATTLE -- The gunman suspected of killing one and wounding several others during an afternoon rampage on the campus of Seattle Pacific University was booked into King County jail Thursday night, the Seattle Police Department said in a late Twitter feed, identifying the man as 26-year-old Aaron R. Ybarra.

Ybarra allegedly brought a shotgun, extra ammunition and a knife to the Queen Anne Hill campus shortly before 3:30 p.m., police said during a briefing earlier in the day. On entering Otto Miller Hall, he apparently opened fire, shooting three students at the Christian school.

When he stopped to reload the shotgun, police said, a student security guard sprayed him with pepper spray and subdued him until police arrived.

A spokeswoman from Harborview Medical Center said in a late-night e-mail that of the four victims of the shooting who were brought to the hospital, only two remain. A woman in her 20s is in critical condition in intensive care after five hours of surgery. A 24-year-old man remains hospitalized in satisfactory condition.

A 22-year-old man was treated and released from the hospital earlier in the evening. And a 19-year-old man who was taken to the medical center in critical condition died shortly after arrival.