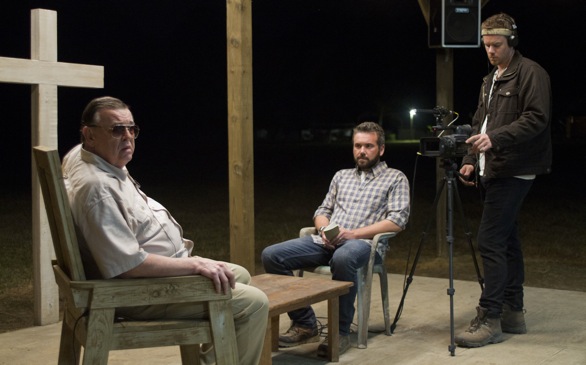 Obsession and unbridled faith have proven to cause some of the world’s biggest atrocities, so it’s no surprise cinema has had a keen fascination with the minds of those bogged down by blind conviction.

Director Ti West joins the collective with The Sacrament, a mockumentary that trails the psyche of cultism, where those who have nothing else in the material world worth holding on to look up and out for guidance.

Taking advantage of the edge and popularity that VICE Media has brought to immersionist journalism, West anchored his story around a typical “Vice” episode you’d catch on HBO…except everything goes wrong.

When Patrick (Kentucker Audley) discovers that his sister Caroline (Amy Seimetz), a former drug addict, has moved out of the country to an undisclosed location with some kind of religious cult, VICE journalists Sam (AJ Bowen) and Jake (Joe Swanberg) see an opportunity to take on a more personal story than usual.

In an extremely poor impersonation of the HBO series and of real VICE-men Shane Smith, Sam tells the camera that they aim to reunite Patrick with his sister, document a day in the life of this mysterious cult called Eden Parish and then convince her to come back home with them. Sounds simple enough.

However, a host of aggressive gun-wielding men welcome them onsite, and they realize that maybe this isn’t just another hippy-dippy commune. But Caroline insists they mustn’t worry about the guns, and that Eden Parish’s undeniable goodness will blow them away, all because Father has created a paradise untainted by the modern world’s filth.

This “Father” that she speaks of, played by a creepy-enough Gene Jones, is the founder, leader and quasi demi-god of Eden Parish. Filled with community members who were all once lost but are now washed of their filth, Eden is violence, racism, sexism and everything negative-ism free. Riiiight.

It becomes increasingly clear to the journalists that something is amiss. Despite a few testimonies from willing members, there are enough averted eyes and clichéd eerie little girls running around that make it obvious Father is up to no good.

Unlike his infamous V/H/S, a shocking horror film riddled with eye-bleeding imagery and ceaseless physical scares, West attests that The Sacrament is meant to be about horror lurking under the surface. It’s meant to be about the terror of the human mind’s malleability.

But unfortunately for West, this film is none of the above.

In recent years alone, directors have accomplished what West pandered to. Films such as Martha Marcy May Marlene (2011) and The Master (2012) captured this sense of irretrievable sanity, where once you go down the rabbit hole, the darkness seems to never let go. These were haunting. These were terrifying. And they weren’t horror films.

West, however, seems to only have blandly mimicked the 1978 story of the Jonestown Massacre, implanted it into the 21st century with the VICE brand stamped on it and called it “compelling.” While elements of the historic mass suicide are very much relevant today, West didn’t put a meaningful enough spin on it to call it significant.

There’s hope in some of the casting choices, like Seimetz who, similar to her role in Upstream Color (2013), plays the part of a lost, brainwashed woman beautifully. Jones also brings a bit of that air of darkness that West so eagerly sought out. The talent well runs dry at that point, as well as any intriguing plot.

Unnecessarily using the media outlet as a mask to hide behind, West intended to create something of depth, something worth observing and learning from. When all is said and done, however, we only learn that perhaps he should stick to the slashers he is known for.

The Sacrament releases in theaters on Friday, June 6, 2014.