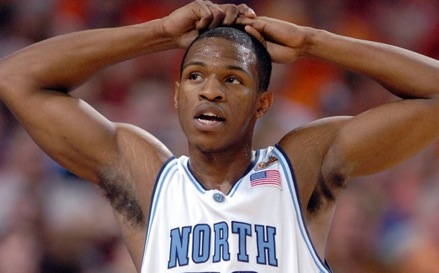 Former hoops star Rashad McCants from the University of North Carolina is coming clean about his college experience, telling ESPN's Outside the Lines he rarely went to class, had tutors write his papers for him and took bogus classes in order to remain eligible to play basketball.

The second-leading scorer who was part of UNC's 2004-05 national championship win said there was a paper-class system at the university, which allowed students not to go to class and only submit one term paper to receive a grade.

Oh, and get this—McCants says that head coach Roy Williams knew all about it.

"... when you get to college, you don't go to class, you don't do nothing, you just show up and play," McCants told ESPN. "That's exactly how it was, you know, and I think that was the tradition of college basketball, or college, period, any sport. You're not there to get an education, though they tell you that. You're there to make revenue for the college. You're there to put fans in the seats. You're there to bring prestige to the university by winning games."

So, what does UNC have to say about all of this?

Athletics director Bubba Cunningham told ESPN, "The university hired former federal prosecutor Kenneth Wainstein in January to conduct an independent investigation into past academic and athletic irregularities. While these are the first allegations we have heard from Mr. McCants, I encourage him to speak with Mr. Wainstein..."

But more importantly, coach Williams released a statement to ESPN that read, "With respect to the comments made today, I strongly disagree with what Rashad (McCants) has said. In no way did I know about or do anything close to what he says and I think the players whom I have coached over the years will agree with me. I have spent 63 years on this earth trying to do things the right way and the picture he portrays is not fair to the university or me."

Well, there you have it. Watch McCant's interview above, and decide for yourself who's telling the truth.