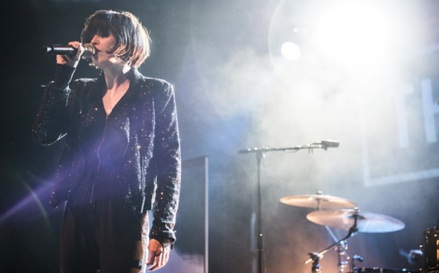 Haley Mary of the Jezabels performs with the band in front of a packed house.
(Credit: Tamea Agle)

Thursday night, a nearly sold-out El Rey was filled with 20-somethings ready to sing along with the Jezabels.

Before the curtain rose, the atmosphere was almost sombre in the venue, and it was hard to tell whether or not the excitement level would rise. Everyone fixed their gazes intently toward the stage and waited silently for the band to make its entrance.

When lead vocalist Hayley Mary walked on stage, the tone completely changed. Faces lit up, fans cheered and without any introduction at all, the Jezabels began their set.

As the band sang, many audience members joined along, knowing every word. Though the set had a very quiet beginning, by the third song the band was dancing and raising the energy level. With their hands waving, the fans got in on it as well.

The Jezabels' tour mate for this leg, Gold & Youth, put on a great opening show. With its indie-electronic sound, this Canadian band complemented the Jezabel's show quite nicely—it was quite the international collection of bands!

The four-piece band from Australia has been creating its self-proclaimed "intensindie" music since 2007 and is gaining a very impressive fan base in America as well as abroad. The Jezabels' current tour, in support of sophomore album The Brink, has been well received; the band has been winning awards and nabbed the No. 2 slot on the Australian charts.

But with Mary's strong female vocals and obvious feminist outlook, the Jezabels have gotten a little flack for their shows. However, they are far from what some may call "angsty-girl rock." Instead, they're more indie-electro pop, and they put on one hell of a show.

Due to some scheduling changes earlier this year, the Jezabels' tour was slightly postponed. However, now they are back at it and will be touring the east coast later this summer.