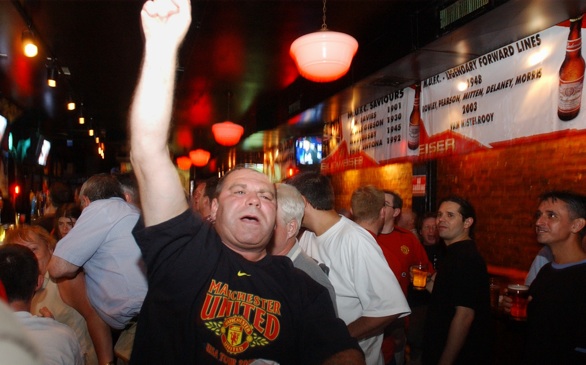 If you hate watching the matches with drunken patrons in sports bars, you're in luck.
(Credit: STEVE DESLICH?MCT)

Can’t make it to Brazil?

That doesn’t mean you can’t elbow your way through a crowd of drunken fans to a front-row seat for this summer’s World Cup, which kicks off Thursday. Viewing parties are scheduled all over Southern California, some aimed at fans of a particular team while others will be strictly non-partisan affairs.

Athletic-apparel company Puma, provider of uniforms to eight of the 32 World Cup teams, will host events before each of Italy’s three games, beginning Saturday at 2 p.m. ahead of the Azzurri’s opener with England. The viewing party, which will take place at the Parlor at 7250 Melrose Ave. in Los Angeles, will feature prizes, giveaways, video games and other treats.

The Galaxy will be cheering on one of its own when defender Omar Gonzalez and the rest of the U.S. team opens its World Cup schedule against Ghana on June 16. The Galaxy will play host to an outdoor viewing party at the Hermosa Beach Pier at 3 p.m. And for the second U.S. game June 22 against Portugal, the Galaxy will stage an event at the Lot 613 event space, 613 Imperial Street in downtown L.A.

The Galaxy will also be teaming with El Torito restaurant, which has billed itself as the “Official March to Brazil Watch Party Destination.” The El Torito in Orange will hold a viewing party for Mexico’s World Cup opener with Cameroon on Friday at 9 a.m., followed by the Spain-Netherlands game at noon. The same restaurant will also show the group-play finals for both Mexico and Spain on June 23 .

In between, Mexico’s game with Brazil will be shown at Universal CityWalk in Universal City. That event begins at 11 a.m. The Galaxy events will feature appearances by current and former players, ticket giveaways, raffles and other prizes.

With Ireland having failed to qualify for the tournament, Rock and Reilly’s Irish Pub at 8911 Sunset Blvd. in West Hollywood hasn’t adopted a particular team playing in Brazil. So it will be showing all 64 World Cup games, starting at 11 a.m. Thursday with the opener between Croatia and the host country.

Traveling during the tournament? No problem. Nine airlines -- including Lufthansa, Emirates, Etihad and Turkish Airlines -- will be showing every World Cup match as well, according to London’s Daily Mail newspaper.

And just because you’re up in the air or not in Brazil, don’t think you’re beyond the long and meddling arm of FIFA, world soccer’s governing body.  FIFA is so protective of its brand that it had 36 spectators removed from a World Cup game in South Africa because they were wearing dresses branded with the name of a Dutch beer that was not an official tournament sponsor.

So if you’re thinking of having your own viewing party, be sure to consult FIFA’s 3&fract12;-page, single-spaced guide of regulations first.