U.S. Men's Soccer Team is Ready for World Cup to Begin in Brazil 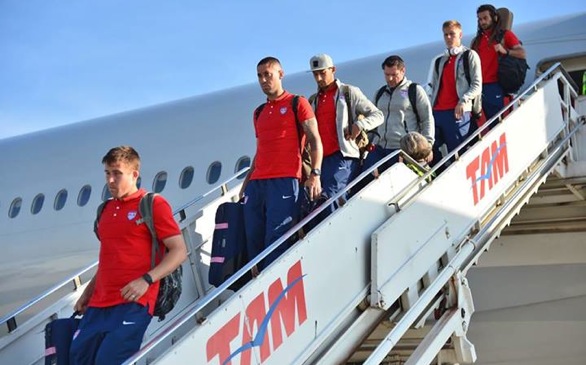 SAO PAULO, Brazil — The U.S. soccer team was scheduled to land here late Monday morning, local time. Though it would arrive fresh off a month-long training camp that left it winded and weary and three consecutive victories that left it comfortable and confident, midfielder Michael Bradley insists none of that will matter when the Americans line up to play Ghana in their World Cup opener next week.

Well, the games meant a little — if only because of what was learned about the team.

Geoff Cameron is the steady, dependable center back the U.S. has been looking for.

Fabian Johnson, at right back, can be solid defensively and creative offensively, adding depth to the American attack, while DaMarcus Beasley is more than capable of playing on the other flank.

And although it took a while, the final game of the send-off series revealed that Jozy Altidore still knows how to score, with his two goals against Nigeria rewarding the confidence Coach Juergen Klinsmann has shown in him while ending a drought that had seen him go scoreless in 27 games for club and country.

For Klinsmann, Altidore's breakout game plus the play of Cameron, Johnson and Beasley probably went a long way toward answering his final questions about who to play when the games start for real.

But the games also showed that the U.S. has to stayed focused and stop making stupid mistakes late in the game, like the fouls the team committed that led to penalty-kick goals in the closing minutes of their last two wins.

"It's important that we keep winning and have a winning mentality," captain Clint Dempsey said. "We've got players scoring goals, getting confidence. What's most important is that the whole team is playing well as a whole and that we go into Brazil on a good note.

"Our hard work is paying off. It's still going to be a lot different when we go down to Brazil because that's the big stage. That's where it all matters."

But how long will it matter? The U.S., in the toughest of the eight four-team groups, needs to finish in the top two to avoid a quick trip home. To do that it needs at least a win and a draw against Ghana, Germany and Portugal — the latter two teams ranked among the top four in the world.

Surviving that crucible and reaching the second round would be a success, Klinsmann believes. And while Cameron wasn't making any predictions about how far the U.S. will go, he says it's likely to be farther than most people thought.

"We could turn some heads," he said. "That's our main goal."