REVIEW: LACMA's Expressionism in Germany and France: From Van Gogh to Kandinsky 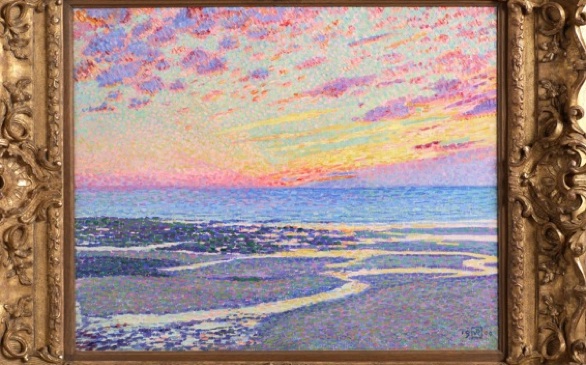 At the center of the expressionist movement of the late 19th and early 20th centuries, there was a desire to emote – that is, to stray from the physical characteristics of the world in favor of placing a personal touch on it. That is why expressionist art portrays real life objects (but with a hint of obscurity), where the emotion is found.

When curators and art dealers find, buy, sell or gather art, there is a sense that their thought process is largely objective; however, subjectivity comes into play, too. Such takes place in the Los Angeles County Museum of Art’s (LACMA) new exhibition titled, Expressionism in Germany and France: From Van Gogh to Kandinsky.

Timothy O. Benson curated the exhibition, and there are more than 100 images – paintings, lithographs, etc. – stored in a large area.

The way these different works of art blend together is shocking. It is effortless for the eye, and the organization often crosses between artists, nations, medium and subject matter. There are moments when the works are so similar that it seems as if the same artist created them. Though this is sometimes true, it varies. The organization is seamless, and perhaps that is why the artists were chosen – because of their uniformity during the expressionist movement.

Similarities also emerge with technique, too. For example, one painting might use the same brushstrokes as the next. Theo van Rysselberghe’s (a Belgian born painter) landscape painting titled Beach at Low Tide, Ambleteuse, Evening shares the same short brushstrokes with French artist Pierre Bonnard’s The Mirror in the Green Room, a painting that could be defined as more portraiture.

These comparisons cross over from border to border, Germany to France and beyond, in such a way that the works blend into one another, and ownership is stripped so that they’re no longer German or French – they're expressionist and European.

The exhibition's design also calls forth a commonality in place of differences. Architectural firm Frederick Fisher and Partners designed Expressionism in Germany and France: From Van Gogh to Kandinsky, and the architects created a space that one could get lost in. Combined with the exhibit's organization, this certainly happens.

The design's most telling feature is the blue backdrop, used in place of the usual white one. Not only does the blue backdrop stay muted, it informs the viewer that this is something special, that the exhibit is unlike any ever seen; it has captured a movement in which giants such as Vincent Van Gogh and others such as Bonnard are all on the same blue playing field.

Expressionism in Germany and France is one to see for a multitude of reasons. One would be the names. Another would be the opportunity for an introduction into expressionism. But what can be held onto after leaving the exhibit is the feeling that, even in division of land, language and politics, there was some alliance among the arts.

Expressionism in Germany and France: From Van Gogh to Kandinsky is on view at the Los Angeles County Museum of Art now until Sept. 14, 2014 at the Resnick Pavilion.