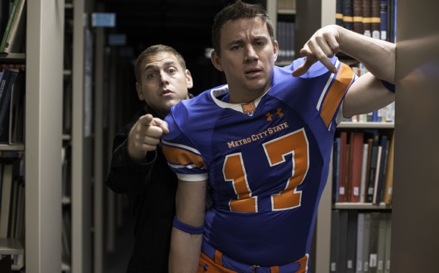 Jonah Hill, left, and Channing Tatum reunite for a funny sequel that's as good as the first.
(Credit: Glen Wilson)

Directors Christopher Miller and Phil Lord—The Lego Movie, Cloudy With A Chance of Meatballs and 21 Jump Street—must’ve never heard the phrase, “Quit while you’re ahead.” Or more likely, they've heard it, ignored it and set out to disprove it.

In Hollywood, sequels are like the nerdy younger brother of the devilishly handsome football star—they share the same name, but it’s obvious which one is more popular. Few sequels match or even come close to the original’s success (ahem, The Hangover trilogy), but Miller and Lord have a contender: this summer’s 22 Jump Street.

For a film relying on the exact same formula as its precursor, Lord and Miller made it clear that they were well aware of the perils of the sequel.

“It’s very challenging to do a sequel, especially for a comedy,” said Lord. “But then we thought, maybe the idea of a sequel rhymes with trying to keep your relationship going. What’s it like to make a sequel compared to the first time you fall in love with somebody?”

Once round two was proposed, the original cast jumped right on board. “People loved the first one,” said Ice Cube, who plays the boisterous Capt. Dickson. “It was only right to do it again.”

This subsequent installment to the Jump Street saga follows undercover cops Jenko (Channing Tatum) and Schmidt (Jonah Hill) as they basically do the exact same thing they did in the first film: develop undercover identities, infiltrate a drug ring and hilariously jump through the hoops of an unlikely bromance.

This time, however, the boys are going to college.

As with the first film, 22 Jump Street’s stars are like yin and yang—complete opposites yet a harmonious duo.

Jenko fits in with puka shell-wearing frat bros by drinking copious amounts of cheap beer, pumping iron and crushing the competition on the football field (Tatum, a former college athlete himself, needed no stunt double for the football scenes). On the other hand, Schmidt can’t seem to hold his liquor, and his physique doesn’t quite match that of the chiseled frat stars. He joins the ranks of wine-sipping slam poets and art lovers. But on and off camera, this odd couple clicks.

“Personally, we always hit it off,” said Hill about his co-star. As for the action scenes, Hill mentioned: “One guy is really good at stuff and the other guy is…uh…not.” Tatum is notorious for worrying insurance companies by doing his own stunts, but Hill picks a premium on the discount menu.

Despite their differences, the pair learned a lot from each other in the film and in reality. “I did the first one because I really wanted to work with Jonah,” said Tatum. “I wanted to tip-toe out into the comedy world, and [Jonah was] a very capable net to have underneath me.”

So, immersed in their disparate college cliques, Schmidt and Jenko attempt to locate the dealer responsible for Why-Phy—a mix between Adderall and MDMA (And yes, the two indulge in the drug, resulting in cartoon-y wonderlands of good and bad trips). The hunt takes them to spring break at the fictional Puerto Mexico, where hordes of nearly naked college students party on the sand to Diplo's bouncing beats.

22 Jump Street is a meta sequel that makes fun of itself and the drawbacks of sequels in general (a perfect example is when Deputy Chief Hardy—Nick Offerman in true Ron Swanson form—announces the new mission to Jenko and Schmidt while alluding to the movie-making process itself: “This department has invested a lot of money to make sure Jump Street keeps going.”).

Somehow, Lord and Miller managed to make lightning strike twice. This film hits all the same notes as the first film, and still, it’s a crescendo of comedy. Creating a sidesplitting sugar rush, Miller and Lord proved another timeless maxim: “If it ain’t broke, don’t fix it.”