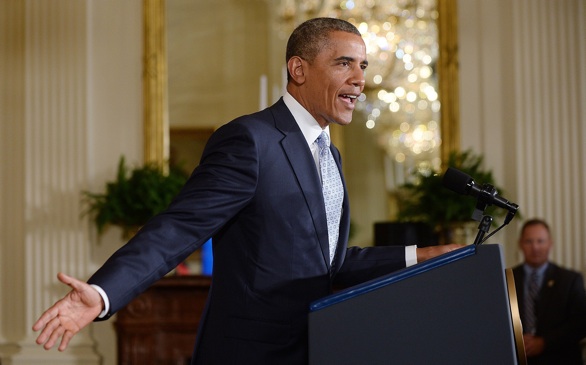 WASHINGTON — In an effort to combat escalating college debt, President Barack Obama on Monday expanded a program that allows borrowers to cap their loan payments at 10 percent of their incomes.

The White House estimates that the plan could help an additional 5 million borrowers.

The Obama administration declined to say how much the proposal would cost and how it would be paid for, though previous estimates put an expansion in the billions of dollars.

“We actually don’t know the costs yet,” Education Secretary Arne Duncan said. “We’ll figure that out on the back end.”

Obama’s action Monday — using his executive power while also urging a divided Congress to do more — is part of a strategy he’s pursued this year as Washington heads into the election season.

Republicans on Capitol Hill criticized the plan for not helping to lower the skyrocketing costs of college.

“Today’s much-hyped loophole closure does nothing to reduce the cost of pursuing a higher education or improve access to federal student loans — nor will it help millions of recent graduates struggling to find jobs in the Obama economy,” said House Speaker John Boehner, R-Ohio.

Obama’s original plan, announced in 2010, is available only for those who started borrowing after October 2007. The expansion will affect anyone who’s borrowed in the past, though it won’t go into effect until December 2015.

The maximum monthly payment is already scheduled to drop from 15 percent to 10 percent in July as part of a different plan created by Congress, though that’s only for new borrowers.

Obama also said Monday that his administration would renegotiate contracts with federal student loan providers to urge them to make it easier for borrowers to avoid defaulting and would work with tax preparers — including H&R Block and the makers of TurboTax — to spread the word about tuition tax credits and flexible repayment options.

He urged Congress to pass a Democrat-backed bill that would refinance most student loans to the interest rate Congress approved last summer for students beginning new loans. Standard undergraduate loans, for example, would be reduced from an average 6.8 percent rate to 3.86 percent under the bill.

The Senate will vote on the bill Wednesday.

“I want Americans to pay attention to see where their lawmakers’ priorities lie here,” Obama said. “Lower tax bills for millionaires or lower student loan bills for the middle class? This should be a no-brainer.”

The president said the average tuition at a public university had more than tripled during the last 30 years while the typical family’s income had gone up just 16 percent. The average borrower at a four-year college owes nearly $30,000 by graduation day.

Sen. Elizabeth Warren, D-Mass., who introduced the bill, said in a news conference last week that the numbers signaled “truly an economic emergency.”

“Do we invest in billionaires who’ve already made it or in young women who are trying to build a future?” she said. “It’s time to pass this bill and give all our young people a fair shot at an affordable education.”

The Bank on Students act includes both federal and private loans, a point of contention for Republicans, who argue that the government shouldn’t interfere in the private sector’s system. The Congressional Budget Office projected that the bill would bring in $5 billion in revenue.

The bill is intended to be paid for by the so-called “Buffett Rule,” which would raise the maximum tax rate on long-term capital gains from 15 percent to 30 percent. The CBO found that the mechanism pays for the bill and helps reduce the national debt.

Democrats have said they’d be open to another way to pay for the bill but Republicans haven’t yet proposed an alternative.

Sen. Lamar Alexander, R-Tenn., said in a statement that the bill was a “political stunt” that didn’t resolve the problem.

“College graduates don’t need a $1-a-day taxpayer subsidy to help pay off a $27,000 loan,” Alexander said. “They need a good job. And Republicans are ready to offer and debate our proposals for more good jobs and better schools, which mean better jobs.”