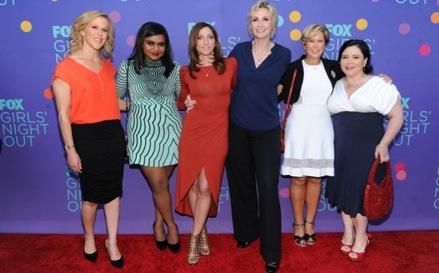 The ladies of FOX's Girls' Night Out.
(Credit: Frank Micelotta/FOX)

Monday night, seven ladies from FOX’s hit shows went down to the Leonard H. Goldenson Theatre in North Hollywood and chatted with the Hollywood Reporter’s Stacey Wilson about their shows and projects, getting into the entertainment business and this “Golden Age" where women are making their mark in television.

“So You Think You Can Dance” host Cat Deeley was scheduled to attend, but unfortunately could not make it.

The estrogen-filled crowd waited eagerly for all the panelists to take their seats on stage and dive into the various topics. Considering most of the FOX gals are involved in comedic shows, the audience was probably expecting a night full of laughs and non-stop jokes—they were not disappointed!

But along with the jokes, these seven women offered some really good advice about the entertainment business, advice all women (no matter what profession they’re in) could appreciate.

Here are the 10 best, informative, hilarious and ”WTF?!” moments from FOX’s Girls’ Night Out panel:

12. Chelsea Peretti, who plays Gina Linetti on “Brooklyn Nine-Nine,” revealed one of the worst pieces of advice she’s ever received: “I got advice to get headshots, and I feel like they’re stupid…I don’t even like them,” she giggled as the audience laughed along with her. “I did cut holes out of the eyes once and wore my own face.”

11. And Mindy Kaling shared the best piece of world advice she received from her mom, who came from Nigeria and worked hard in the U.S. to become a doctor. She asked her mom, “How and why did you do it?” And her mom used to “look at the white men who had the jobs that she wanted, and she would say, ‘Why not me?’”

10. Kaling’s favorite part about creating and acting in “The Mindy Project?” “I get to make out with a lot of good-looking guys!" she said.

8. On a more somber note, Lynch talked about Cory Monteith’s death and how it’s still affecting the “Glee” cast: “I think he’s such a big part of why this show is such a hit,” she said. “And it’s really, really difficult. Everybody gets through it in their own way, but there’s a huge gaping hole in the show.”

7. Lynch also spilled a few details about “Glee’s” future: “It looks like [the characters] are going to be coming back together, I think, in Ohio. That will be really fun.”

6. Peretti’s favorite “Brooklyn Nine-Nine” moment: “They threw some thumbtacks up at the ceiling, and it rained down on the other actors—but the pins weren’t removed! I thought it was a prop…it was pure, physical comedy.”

5. And Kaling’s favorite “The Mindy Project” season: “I personally think the show is better earlier than other people do,” she admitted to a round of applause. “I’m going to stand by that first season!”

4. Liz Meriwether talks working with singer Prince on “New Girl’s” Super Bowl episode: “We reached out to him in season two for the ‘Virgins’ episode, because we thought it would be funny if Cece lost her virginity to Prince…and he was like, ‘Thanks, but I don’t want to do that,’” she laughed.

3. Yeardley Smith proved the haters wrong when she became an iconic voice on “The Simpsons:” “I was teased for having such an interesting, odd voice as a child, so I certainly never thought it would be my fortune…but who has the last laugh now?” she asked.

2. Heather Kadin proves that working for free can reap the benefits in the long run: “I moved [to L.A.], I knew nobody, I had no connections,” she said. “I just sent my resume to every single production that had to do with Los Angeles…this one woman was like, ‘I need someone. I can’t pay you anything, but if you want to come over and sit down with me, you can work for free.’ I said, ‘Great!’”

From that unpaid gig, Kadin was hired as an assistant and later moved on to work for a film director and on one-hour ABC dramas. Yasss!

1. And the highlight of the night goes to Lois from “Family Guy,” aka actress/writer/producer/comedian Alex Borstein: “I made the mistake of going to SoulCycle for the first time,” she said. “[SoulCycle] just removes your soul from the vagina, like it’s a vacuum.”

Well, it wouldn't have really been a girls' night out if the word "vagina" wasn't used at least once, right?

TV Time
'Star Trek' is the greatest sci-fi franchise of all. Why it's stood the test of time
891 views

TV Time
‘Heels’ gets into the ring with a small-town Georgia wrestling family
1,122 views