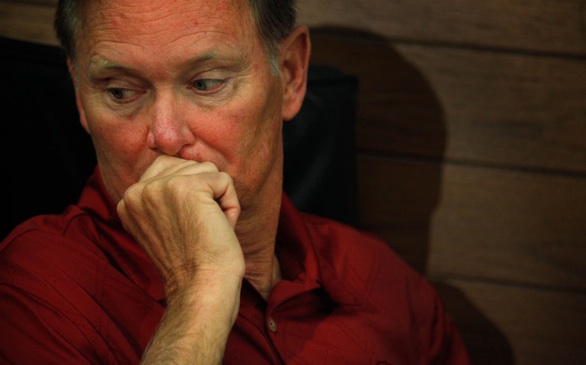 Pat Haden replaced Mike Garrett as USC's athletic director in August 2010, two months after the NCAA sanctioned USC for "lack of institutional control." Reporter Gary Klein recently met with Haden to talk about the last four years and the future.

Klein: How has USC fared through the four years of probation?

Haden: I think we've kind of worked our way through this. When you think about it… in spite of those penalties we did win 10 [football] games twice, we put together $120 million of renovations in our athletic facilities. We've recruited pretty good classes even though they're lower numbers… and I think we've embraced compliance while still allowing the joy of athletics.

Are you able to quantify how much the NCAA penalties cost the university?

Athletics is such a small piece of the budget here, but there is a very large reputational risk in athletics. If you have an NCAA scandal or academic fraud issues, those are things you really worry about. Our fans worry about beating UCLA or Notre Dame or whatever, but if you're a sports administrator or academic … it's not about dollars and cents, it's more about reputation.… Everybody has an interest in the reputation of USC as an academic institution and athletic institution.

What has changed since you arrived?

It's a different environment. One of my real challenges at first was trying to adopt and embrace this culture of compliance and not suck all the fun out of sport by everybody looking over their shoulder. 'Hey, you're riding a new bike. Where did you get that bike?' That was difficult. I think we may have erred in the first year or so on being too observant and almost accusatory. I think we've done it better the last two years.

What has USC learned from this experience?

You need to be constantly vigilant and constantly educating. … Here in an area like Los Angeles, there are a lot of things that can go wrong. So you're just keeping your eyes and ears open, and I think everyone's got to have ownership. It's a shared responsibility we have and I've told everybody that reports to me: Part of your job is compliance.

How would you describe USC's relationship with the NCAA when you first came in and where it is now?

I'm not sure we had one, to be perfectly honest. I know lots of people across America despise the NCAA, but they're our regulator. We've got to deal with them. … We felt it was important to build a relationship. The first month that I got here [USC President] Max [Nikias] and I and Dave Roberts went back to the NCAA and I've been back a couple times a year every year. And so I think we have a real good relationship.

Many people thought you would be AD only long enough to steer the ship through the storm. How long will you stay?

I'm not sure. I promised the president I would do it through the probationary period.

Does that include the year after probation?

Oh yeah, I'll be here next year. I don't have a contract. I'm an at-will employee. The president can fire me any time he wants. And he might.

So you have no plans to step away at a specific date?

I don't. When you go through the hiring process, which we did with a lot of coaches, not just football and basketball, but they ask you what the situation is. So I didn't want to be disingenuous with those people and I told them, 'Hey, I don't know the answer to that question, but there are plenty of very capable people that work here in Heritage Hall that can do this job better than I can, and I'm not saying that gratuitously, I mean it.'

The Los Angeles Times did a "state of USC" story in 2013 after the loss in the Sun Bowl and when a number of coaches were being evaluated. The fan base was restless. You seemed as if you were getting it from all sides.

That was the worst year of my life. I was getting it from all sides. … Nobody likes to fire people, but it's part of the job too. In this job, very rarely do you hear, 'Hey, you're doing a wonderful job. There's nothing wrong.' So it feels like a tsunami of complaints that come at you all the time. And even for programs that are winning, and it wears you out.

Has the turmoil receded?

It has on the football side, certainly. But I still get it in a lot of other sports. I know I'll get it when we have a plan for the Coliseum. I know that tsunami will come again. You just deal with it. It's not a fun part of the job.

What is the fun part of the job?

Working on a college campus with interesting things percolating all over the place, being around young people and some of the world's best athletes. And, you know, bumping into some of these kids in 20 years, if I'm alive, and kind of seeing how they turned out.