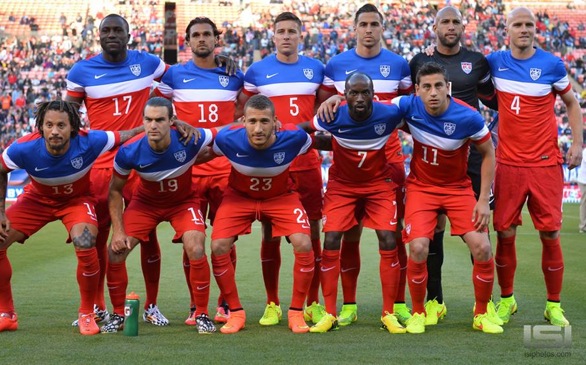 Mexico's players had to pile into taxis to get to training Monday when the team bus wouldn't start.

Officials with the English team, whose hotel is within sight of Brazil's largest slum, worry the gridlocked streets will trap the players in traffic for hours, delays the Iranian team has been dealing with for a week.

And health inspectors paying a surprise visit to the Italian team's headquarters found more than 100 pounds of spoiled food in the hotel's kitchen.

Distractions like these have already proved unsettling to some of the 32 teams poised for the monthlong World Cup, which kicks off Thursday. But for the U.S. team they just might be an advantage.

"It's going to be a World Cup of patience and of knowing how to handle the element of being able to suffer at times," U.S. midfielder Michael Bradley said Tuesday, the team's first full day in Brazil.

In fact, U.S. Coach Juergen Klinsmann has been preparing his players for a less-than-smooth World Cup since January, when he held an abbreviated training camp in the heat, humidity and the chaos of central Sao Paulo.

"It is not going to be a perfect World Cup," he said. "It is going to be an extreme type of World Cup. You have got to be prepared that you are not getting everything laid out on a nice table. Brazil works differently."

So though Germany and Portugal might have more talent than his team, Klinsmann is betting they won't be able roll with the punches as well as the Americans. The same goes for travel. No team is flying as far — nearly 9,000 miles — and few are playing in more extreme conditions than the U.S. during the three-game group stage.

So Bradley, one of 10 players who comes to the national team from Major League Soccer, says that challenge can be an advantage as well.

"That's something that's being talked about in a negative way with other teams. Guys playing in MLS constantly travel across the country," he said. "When you talk about playing and the need to travel it doesn't bother me. It excites me.

It may be a small point. But World Cup games have been decided by less.

"You get to this moment and you get to these kinds of games and the margin between winning and losing is so small," Bradley said.

The U.S., which is training at Sao Paulo FC's immaculate practice facility in the central part of the city, worked out Tuesday morning in cool temperatures and a persistent drizzle. More rain is possible Wednesday and the forecast for the team's World Cup opener Monday against Ghana in Natal calls for a chance of rain and evening temperatures in the 70s.

Klinsmann joined the team in Brazil shortly before the workout after staying behind in Miami to scout Ghana's exhibition game with South Korea, which the Africans won 4-0.

The U.S. will hold an open workout Wednesday before playing a closed scrimmage with Belgium on Thursday, its last test before the World Cup.

"We've put a lot of work into everything the last year, the last two years," American defender Matt Besler said. "So as a group everyone is definitely ready to be down here and ready to play our first match."