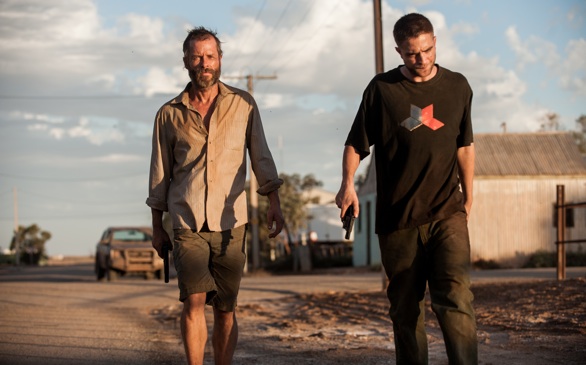 Guy Pearce and Robert Pattinson star in The Rover.

Whether it’s by zombies, aliens, nuclear destruction or natural disaster, the end-of-the-world concept has become somewhat of an infatuation in film these days. Rarely, however, do we get a scenario so tangible it makes us nervous to witness what could be our future.

Coming off the extreme success of his previous feature Animal Kingdom (2010), writer/director David Michôd forces us to face this dark hypothetical with The Rover, a glimpse into life in the Australian Outback 10 years after the Western world’s economic collapse. With foreigners flooding into the country to tap into its wealth of mineral resources, Australian citizens are left in desperation and squalor—violence and crime are the easiest means of survival.

Eric (Guy Pearce) is a simple man. With no family or friends, he holds onto nothing of material importance except his beat-up car that he drives through the dusty wilderness until three bullet-riddled gang members pinch it while he’s turned his head. What they don’t expect is for Eric to relentlessly hunt them down at whatever cost to get his car back.

A man of few words and even littler patience, Eric’s conscience is too bloodied to feel bad about taking down anyone who gets in his way. This changes when Rey (Robert Pattinson), the dim-witted brother of one of the gang members who was left behind for dead, stumbles into Eric’s warpath. With little direction in the wide, hot Outback, Eric takes Rey hostage, forcing him to lead him to his brother and the car. The road is desolate, and these men are left with no one but each other for company, whether they like it or not.

And at first, they don’t. But then something happens between the two men—something complex, quiet and strong.

Despite its rather stark and scant storyline, especially compared to Animal Kingdom, The Rover offers a remarkable, yet simple character study on two people.

But similar to Animal Kingdom, Michôd struck gold with his ensemble. Unsurprisingly, Pearce delivers a stoic, yet subtle performance where talking is wholly unnecessary until you need to get what you want. “Have you seen it?” seems to be one of the few phrases worth repeating, and his tone makes us hope someone answers.

The real standout, however, is Pattinson, who is given an extremely difficult role as a slow-minded fellow abandoned by his only family and is now in the hands of a near-psychopath. Pattinson elevates his character to something complex and unexpected, and with The Rover, he proves the Twilight Saga was a mere stepping-stone to a much larger and grander platform. I, personally, am thankful to Michôd for giving him that opportunity.

Cinematographer Natasha Braier’s gritty vignettes of the Australian Outback highlight its bleak beauty. That, mixed with Antony Partos’ haunting industrial soundtrack, gives the film a textured look into a world full of apathy and desperation.

While it evolves from a dystopian thriller, to a road movie, to a buddy film, The Rover never takes on the caricature of any of these genres. It doesn’t squander for the gimmick that causes the demise of humanity, saturate the long moments on the road with meaningless chatter or indulge in a sappy coming-together of two unlikely characters. Eric and Rey merely breathe each other in, because they are the only ones giving each other life.

Animal Kingdom fans may criticize Michôd's latest film for its much humbler plot, laden with silence and contemplation rather than twists, turns and multiple storylines. But, as Rey so poignantly explains, "Not everything has to be about something."