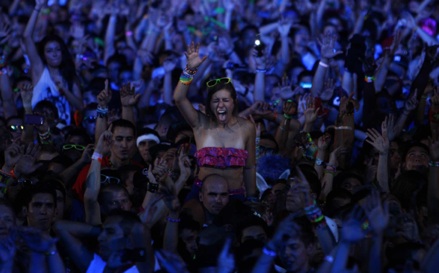 Which band are you most excited to see?
(Credit: Genaro Molina/Los Angeles Times/MCT)

The Electric Daisy Carnival (EDC) is quickly approaching (from June 20 to 22 in Las Vegas), and as we make our preparations for the journey to what seems like an electronic music mecca, it’s time to start thinking about which DJs and music artists to check out there.

While a lot of us are totally psyched to fist pump and shuffle to big name DJs like Avicii, Tiësto, Armin Van Buuren and Kaskade, there are a lot of great artists on the lineup that maybe aren’t so recognizable or well-known to some of us.

Here’s a list of artists to watch while at EDC. Whether they are new to the EDM world or whether they have been around for a while, these are artists that you definitely don’t want to miss.

DEORRO
Deorro, whose actual name is Erick Orrosquieta, is a producer, DJ and the founder of the music label Panda Kick.

A Los Angeles native, Deorro first started out by playing small local gigs around the city at 14. In 2012, his successful career jumped off when his remix of “Make Some Noise,” by DJ/producer Chuckie, made the Top 50 on Beatport. Since then, he’s created original productions, remixed and collaborated with big name DJs and producers like Steve Aoki, Axelwell and Diplo.

A fusion of Dutch, moobah, house and progressive, Deorro’s music is upbeat, uplifting and bound to be a great time at EDC.

Make sure to catch his set, as he recently announced that he will be retiring from DJing to focus more on his family, producing and helping out new talent.

To check out his sound, listen to his songs “Yee,” “Five Hours” and “Hype.”

BRANCHEZ
Hailing from New York City, Samuel Kopelman (aka Branchez) is a young DJ/producer who has been on the rise within the hip-hop and electronic music scenes.

Growing up, he listened to a lot of Motown and funk, which he cites as some of his main musical influences. You can hear the soulful and sexy beats of both genres in his mixes, as well as hip-hop, rap, R&B, club, big-room, instrumental and electronic music.

A newbie to the music festival world, Branchez will be performing a lot of great original productions and remixes. He is well known for his bootleg of Rihanna’s “Stay” and his tracks “Treat You Right” and “Shake,” which were both featured in the Skrillex BBC Essential Mix.

If you’re looking for a funky good time and a break from house and trance, Branchez is well worth seeing.

LADY FAITH
One of the few female artists on the lineup, Lady Faith makes her return to EDC after performing at the festival the past two years. DJing since 2007, she is well known locally and internationally for her hardstyle, hard dance and hard trance music.

Lady Faith, born in Iran and raised in L.A., creates unique tracks by drawing from her culture, mixing pounding kicks with sounds found in Persian music. Her music is dark, emotional, intense and euphoric. Throughout her career, she has performed around the world in the United States, Canada, Europe and Australia with the goal of introducing the American hard style to different countries.

A DJ noted for her energy, enthusiasm and self-proclaimed alter ego as “Queen Bitch of the Universe,” Lady Faith’s set will definitely get her audience dancing and jumping.

Never heard her tracks? Make sure to check out “Fame” (with The Pitcher), “Pleasure & Pain” (with Atmozfears) and “Moxie.”

THE GLITCH MOB
A Los Angeles-based band, The Glitch Mob is a three-piece, hip-hop electronic group that will bring live music to EDC. Band members Justin Boreta (Boreta), Ed Ma (ediT) and Josh Mayer (Ooah) formed the group back in 2006 with two other members, but over the years the three core members stuck together releasing two albums: Drink the Sea and Love Death Immortality.

Creators of glitch-hop and big within the L.A. beat scene, the group told WXJM Radio that its music is like “Indiana Jones riding through a psychedelic tidal wave of machetes and piano notes.”

They also told Campus Circle earlier this year, "We’re just trying to make a full Glitch Mob experience, everything from the visual content to the instruments that we play, to the custom crafted sets."

Although their sound has changed over the years, the songs “Can’t Kill Us,” “Animus Vox” and “Fortune Days” are great examples of their music.

If you want to take a break from seeing DJs and experience live music, The Glitch Mob is a must.

MAYA JANE COLES
Maya Jane Coles, a British-Japanese DJ and producer, is another female DJ that will grace EDC-goers with her presence this year.

Despite the fact that female DJs and producers are few and far in between in EDM, Coles is a great example of the talent that female electronic artists can bring to the genre. Even more, she has taken it a step further with her music by playing a role in all aspects of creating her records. She writes, produces, engineers, arranges, mixes and performs all elements of her tracks, sometimes even designing the sleeve artwork.

She first began her career producing hip-hop and trip-hop at a young age, but later created tracks that drew on house, techno, R&B and dub. Listen to “What They Say,” “Wait For You” feat. Tricky and “Meant To Be” to get a feel of her sound.